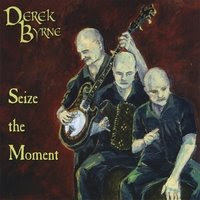 Derek Byrne has three great loves, his family, music and Ireland. After spending six years touring with Riverdance, and several more with his band, Eider, Byrne has settled down into a solo career. Byrne released two solo albums in 2008. We were lucky enough to receive Seize The Moment for review. Seize The Moment is a rare album that builds into something more than just recorded muse; It’s an experience. Derek Byrne sings and plays as If these songs run in his life’s blood. The Milwaukee, Wisconsin (originally Kildare, Ireland) based singer/songwriter gives his all on the twelve songs presented here. Whether it’s outstanding instrumental work (Eidirian, Blue Eyed Canyon, Running On Fumes Theme) or amazing vocals, Byrne is on top of his game.

There are two songs on this album that are other-worldly, they’re so good. Seize The Moment is a beautiful song about keeping love alive in light of all the responsibilities and pressures that day to day life places on our shoulders. It’s a message we would all do well to stop and listen to from time to time, and the song itself is timeless. Expect this to be picked up and covered again and again by other artists. Likewise The Beautiful Truth; a paean written from father to daughter, filled with all of the love and emotion that relationship classically encompasses. A stone would failed to be unmoved by The Beautiful Truth. Both of these songs are special in that they represent a feeling or relationship in a fashion that is iconic and archetypical while remaining incredibly personal and touching. The musical arrangement for each is amazing.

Of course the rest of the album isn’t so bad either. Byrne is an amazing instrumentalist, and that runs through all of his songs, but Eidirian is a particularly representative piece. Rhythm Of Falling is a starkly honest song that is all heart and very memorable. Save Tara is a gorgeous a Capella piece that you’ll have to hear to believe. Red Is The Rose marches to a martial beat in a classic performance. Other highlights include My Land, Hawaiian Pigeon Breakdown and Marie’s Wedding.

I’ve never heard of Derek Byrne before this, and I am utterly amazed that a singer/songwriter this talented could stay effectively hidden from the world for this long. A gifted lyricist as well, Byrne represents the human heart in his music like no other songwriter I’ve heard, all done up in classic Celtic/folk arrangements. Perfect is, of course, unattainable, but for the 12 songs on Seize The Moment, Derek Byrne comes as closes as it’s possible to come. Seize The Moment is, of course, a Wildy’s World Certified Desert Island Disc. Make this CD part of your collection.
Rating: 5 Stars (Out of 5)

You can learn more about Derek Byrne at http://www.derekbyrnemusic.com/. You can purchase Seize The Moment at www.cdbaby.com/cd/derekbyrne2.
Posted by Wildy at 5:20 AM

Wildy, I don't know you at all but I can say with absolute certainty that you are incredibly astute. I had the luck of being in the House of Guinness in Waukesha, Wisconsin a year ago when Derek was playing, and I have been a fan ever since. My husband and I see him there once a month, and he also plays in the Milwaukee area as well as at Irish Fest every summer. I am delighted to see Derek get such a wonderful review, thanks for posting it!