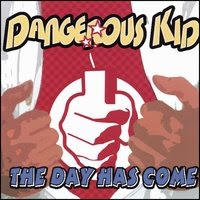 Dangerous Kid formed in 2005 in Washington, D.C. as an outlet for singer/songwriter’s Jay Rapoport’s piano-fueled alt-rock songs. The Berklee School Of Music grad moved the band to New York City in 2007 and celebrated y releasing their debut CD, The Day Has Come. Containing fourteen songs of piano rock, ala Ben Folds and Billy Joel, The Day Has Come is a dynamic and colorful representation of the range and vibrancy of Rock N Roll piano. Supported by Matt Dosberg (bass & acoustic guitar); Paul Withers (drums) and special guest Steve Herrman (trumpet) of Lyle Lovett’s Large Band, Rapoport plays and sings for all he’s worth.

The Day Has Come opens with Moving On, a straight ahead rock tune with a driven rhythm section and lots of piano accents. This is a decent opening but is probably my least favorite track on the CD. The Billy Joel influence shows up on Give It All Away, where you can tell that Rapoport has listen to a lot of early Joel. Comparisons aside, it’s a great rock song that should be a concert favorite for Dangerous Kid. Cue up the mix tapes for Fall At Your Feet; a song of devotion and pedestal placement that will melt hearts. There aren’t many songwriters doling out love songs like this these days; get this placed on a movie or television soundtrack somewhere and Dangerous Kid won’t be able to press CDs fast enough to meet the demand. Wow.

What Did I Do is a personal favorite, and upbeat yet dark rock song that is the perfect remedy for a fight with your significant other. This one will stick out in your mind and the melody just won’t go away. You Should See The View again shows the influence of early Billy Joel, particularly in the piano part. Rapoport is at his very best here. Dangerous Kid gears up next for the melancholy schmaltz on Make The Night Last, a pure singer/songwriter tune, circa 1975.
Someone’s Son is a wonderful song about the truths of war that often don’t hit home until it’s too late. Love Me Tonight is another great song in the style Billy Joel played before he really hit it big. Rapoport displays a keen ability to turn a phrase here on top of writing excellent piano-based music. Rock Star calls back to a time when glam and Rock N Roll went hand-in-hand. The song is a tongue-in-cheek display of the power of stardom, both over self and others. Dangerous Jam is a fun musical breakdown that skirts the edges of jazz and allows the band to just hang loose for a few minutes; it’s a fun listen. Dangerous Kid closes out the set Never Too Late, an incredibly poised and thoughtful song about hope.

Dangerous Kid is a victim of how good they are. True songwriting and performance talent is often relegated to the second tier of a music industry more concerned with marketing a look or fashion than good music. Twenty years ago Dangerous Kid would have had a major label deal and all the backing they could desire. They’d be playing stadiums by now instead of clubs. This is a band that deserves to make it to the big time, based on Jay Rapoport’s songwriting and vision, and the support of one of the tightest rhythm sections on the East Coast. The Day Has Come is an essential disc. If you are a Billy Joel or Ben Folds fan then you’re going to love this CD. If you’re a fan of great and varied songwriting, then give Dangerous Kid’s The Day Has Come a spin. You’ll be happy you did.

You can learn more about Dangerous Kid at http://www.dangerouskid.com/. You can purchase a copy of The Day Has Come at www.cdbaby.com/cd/dangerouskid2. You can also download the album through iTunes.
Posted by Wildy at 5:20 AM