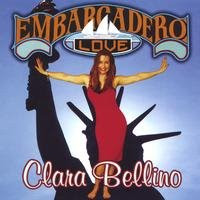 Clara Bellino melds the worlds of American and European popular music styles like few others have. Memorable melodies, infectious rhythms and a wry sense of humor are the earmarks of Bellino’s material. Born in Paris, France, Bellino spent a number of years performing on the West Coast of the United States, even landing a role as a singer in the 1993 film, Steal America. These days, Bellino performs to support her 2006 release, Embarcadero Love. Recorded while living on a houseboat at Embarcadero Cove (Oakland), Embarcadero Love has a free and easy feel that’s full of life, love and a forceful sense of humor.

Bellino studied music in Conservatory for ten years in France, and was introduced early on to jazz and classic American popular music artists by her father. These influences inform Bellino’s musical choices, as does a progressive socio-political mindset that comes across in her lyrics. Bellino opens with Tout Est Fini, a French language pop song with an infectious dance beat. Swordfishtrombone is an abstract musical piece built on colloquial humor. It’s a fun listen. Peaceful Solution draws on a modern R&B sound to deliver a pop culture re-working of the Prayer of St. Francis Of Assisi. It’s catchy and poignant but alternates a peace-oriented chorus with preachy verses.

Something Cool is a classic song. Bellino dusts off her jazz roots in a song of mistaken intentions. The subtle shift in attitude of the protagonist here is the stuff of movies (or at least sitcoms). Potential Criminal is a sardonic take on the perceived social status of a naturalized US citizen (or perhaps any US citizen in this day and age). Other highlights include Game Up Big Pickle, Big Picture and Goodnight Baby.

Clara Bellino delivers intelligent lyrics in smart, focused pop music that mixes elements of American glam-pop with the more refined sensibilities of Europop. I suspect Embarcadero Love would get mixed reactions from American audiences as an inherent European sense of superiority is woven into the fabric of the CD through Bellino’s cutting sense of humor. European audience may likewise hold the CD in contempt for its distinct American influences. This probably means Bellino is hitting some truth on both sides of the ocean. Embarcadero Love is a strong pop record and definitely worth investing a little time in.

You can learn more about Clara Bellino at http://www.clarabellino.com/. You can purchase a copy of Embarcadero Love at www.cdbaby.com/cd/bellino.
Posted by Wildy at 5:10 AM

Hi Wildy, many thanks for taking the time to listen, and review my album. I so appreciate the support. Up until I read my last couple reviews I had very little notion about the humor in my stuff! But it keeps coming up, so I'm learning about myself too. Best wishes to you, Clara B.