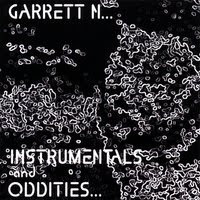 Amidst the snowy slopes and frozen ropes of Aspen Colorado flourishes instrumental artist/composer Garrett N. Drawing on influences ranging from composer Lalo Schiffrin to early Pink Floyd to George Benson, Garrett N. manages to never repeat himself in a musical world built on Ambient sounds and punctuated rhythms. His debut album, Instrumentals and Oddities is fourteen tracks of music to relax and explore to.

Eorche 2 leads off the set with distorted guitars and a bass melody against the backdrop of a slow, steady beat. Entrancing and dark; this is the perfect mood setter for the album. Masterpiece is as musically obtuse as Pink Floyd ever was, and is very much in the spirit of recordings such as Umma Gumma. Billie J. is one of the stronger tracks here as well; built on a Drum N Bass base with a sonic wash of keyboards, live electric guitar and various effects. AquaCave is perhaps one of the most prescient representations of motion in music you’ll find. You can actually envision yourself drifting down through water like a tendril.

4567 Down! Is intriguing. The song hints at structure while moving through deep and murky soft-core Industrial waters. Cloaked confused me a little on first listen, as I thought Garrett N. was using a dulcimer for a few minutes, but it sounds like a very unique picking style on standard guitar. Lateprod1 is a danceable song that sounds like it should be on the soundtrack of a Tim Burton movie. Garrett N. pulls out a wonderful jazz/funk/electro hybrid on The Thought Had Crossed My Mind. This one has real commercial/club potential. The album closes out with Cheap Unleaded, an odd spoken word/noise track that is in the essence of some of Pink Floyd’s weirder stuff.

Garrett N. mixes old and new sounds on Instrumentals and Oddities to come up with a sound and style that is distinctly his own. You’ll hear the occasional nod to Pink Floyd here, as well as a few pieces that are more cinematic in scope, but in general Garrett N. is writing for himself. The result is a wonderful electronic patois that will keep you coming back for more. Instrumentals And Oddities is a must listen for an aspiring electronic musician or fan. Even folks who don’t normally take to the electronic side of the staff will find much to like here.

You can learn more about Garrett N. through his GarageBand profile. You can purchase a copy of Instrumentals and Oddities at www.cdbaby.com/cd/garrettn2. You can also access Garrett N’s music through outlets such as Amazon.com or iTunes.