Review: Green River Ordinance - Out Of My Hands 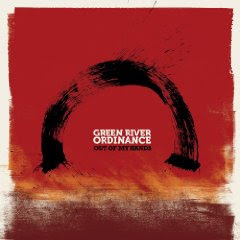 Green River Ordinance – Out Of My Hands
2008, Capitol Music Group

Green River Ordinance hails from Fort Worth, Texas with a sound that is meant to be on the radio. Lead vocalist/guitarist Josh Jenkins is joined by brothers Geoff (bass) and Jamey Ice (guitar), Josh Wilkerson (guitar) and Denton Hunker (drums). Green River Ordinance is about to release their major label debut, with Out Of My Hands hitting shelves on February 24, 2009. Influenced by bands such as The Goo Goo Dolls, Third Eye Blind, Coldplay and Lifehouse, Green River Ordinance is set to make a big impact. Believe me, you’ll want to check this one out.

Green River Ordinance opens with Outside, a wonderfully infectious rock anthem fueled by jangly guitar and a catchy melody. Lead vocalist Josh Jenkins sounds quite a bit like John Mayer as might sound fronting a band like The Goo Goo Dolls. Outside is the sort of song that could have significant potential on pop and modern rock radio as well as licensing for television/movies. Come On has similar potential. It’s amped down slightly from the opener but has a strong pop sensibility that is likely to make it a fan favorite. On Your Own shows the softer side of Green River Ordinance in a poignant ballad. In this moment you can hear the vast commercial potential of the band come together like a thousand angels dancing on the proverbial pin.

Different (Anything At All) continues in the catchy guitar-rock vein where Green River Ordinance seems to thrive. This is yet another song with real commercial potential. Last October offers up another dose of poignant balladry that blows up into what may be the strongest pop/rock hybrid on the album. You’ll also want to check out Sleep It Off, Getting Older and the heart-on-your-sleeve ballad Endlessly. Green River Ordinance closes out with a ballad this absolute mix-tape material; the sort of song you expect hundreds of little John Cusack clones to be playing on boom boxes outside the bedroom windows of little Ione Skyes everywhere. This is the song most likely to get them on the map.

You can learn more about Green River Ordinance at http://www.greenriverordinance.com/. You can pre-order Out Of My Hands, due out on February 24, 2009, on Amazon.com.
Posted by Wildy at 5:10 AM