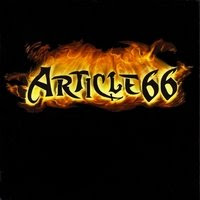 Miami’s Article 66 are unique on many levels. Formed by a group of law students, the band creates raw, emotionally charged songs that can’t be ignored. Add in the fact that Article 66 comingles rock and rap in a way that almost no one else does well, and you have something worth checking out. Article 66 released their debut album, Article 66, on June 6, 2008 (6/6). The band has been through a number of personnel changes but continues to thrive. Tony “T-Bone” Tomas plays guitar and provides the rock vocals on the album, while DJ Jam is Emcee, providing sublime rhymes against the backdrop of heavy guitar, drum and bass. Listen up!

Article 66 mixes elements of Rap, 80’s hard rock and modern rock into a wonderfully geeky combination that’s part hip-hop and part head-banger love fest. Juxtaposing rap rhymes and rhythms with heavy guitar (sometimes bordering on thrash), Article 66 creates a rap/rock hybrid few bands have explored. Lyrically they can run from serious to funny to bizarre (sometimes in the same song). The end result is a generally entertaining mish-mash of sounds and styles. I would advise checking out the song Misread, which is incredibly commercial and listenable. Astronomy Teacher is Hot For Teacher for the Big Bang Theory generation. It sounds sort of like Weezer on anti-depressants. The American Nightmare is a catchy rap/rock mix that’s right in Article 66’s musical wheelhouse. Hershey Squirt recalls the sort of lyrical content you might expect from early Ween, although with less subtlety (if possible).

Article 66 is an interesting listen. There’s no doubt about it, you’ll either love them or hate them depending on your personal musical proclivities. If you enjoy bands like Weezer, Ween or Devo then Article 66 will definitely appeal to you. For rap fans this is entertaining light fare, but Article 66 gets major points for melding two styles in a way that hasn’t been done well often, and getting it right (most of the time). It’s a decent listen for the adventurous of ear.

You can learn more about Article 66 at http://www.article66.com/. You can purchase a copy of Article 66 at www.cdbaby.com/cd/article66.
Posted by Wildy at 5:00 AM