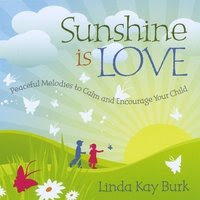 Linda Kay Burk is a singer/songwriter from Rocklin, California who writes uplifting and calming songs for children. When not writing songs she is active in various programs working with and serving youth. Burk released her third album, Sunshine Is Love in January of 2009, entitled Sunshine Is Love. It’s eleven songs of sweet and mellow children’s songs sure to strike a chord with parents as well.

Sunshine Is Love opens with Butterfly, Land On Me, a song of discovery and wonder seen through a child’s eyes. Heaven Is All Around Me isn’t so much a religious song, as you might imagine, but a metaphor for being surrounded by love and beauty. The arrangement includes piano, acoustic guitar, strings and woodwinds. It has a daydream-like quality to it and sounds like something you might hear in a 1970’s Disney movie. Sunshine Is Love continues in the children’s/folk vein in which Burk primarily writes. Its an extremely pleasant melody and a positive message. This song could almost be a child’s prayer. Moms out there will want to catch Just Like You. Get the tissues ready for this one.

One of the true highlights of the album is She Planted The Seeds; a parable and tribute of sorts to motherhood. In the same vein, I Have A Little Child In Me is sweet, but at times lyrically awkward. Dancing In The Clouds is a sweet song that again sounds like it might have been from an old Disney film. Sleepytime Bear is an ode to a child’s favorite nighttime companion. Written with the cadence of a lullaby, Sleepytime Bear is touching and gentle. The album closes out with instrumental versions of Sleepytime Bear and Sunshine Is Love, where the melody is played by woodwinds.

Linda Kay Burk provides us with an old fashioned children’s album in Sunshine Is Love. This is mellow, feel good stuff that will appeal to some parents and children, particularly those of gentle disposition. Musically, Linda Kay Burk is extremely talented, writing musical arrangements that could be use in motion pictures. As a whole it’s a solid children’s album, but right or wrong its way out of tune with popular culture. Children who have been exposed to the modern culture scions like Disney and even Thinkbright or PBS will find this un-engaging. Families who eschew television and pop culture interference in their children’s lives will likely find Sunshine Is Love is charming and sweet. Through it all, Linda Kay Burk has created a gentle and kind children’s album whose sweetness and grace is insistent. It’s just a question of finding an audience who will listen.

You can learn more about Linda Kay Burk at http://www.songsofsingingbird.com/. You can purchase a copy of Sunshine Is Love at www.cdbaby.com/cd/lindakayburk3.
Posted by Wildy at 5:00 AM