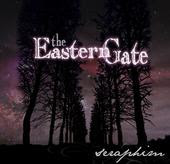 Hillsdale, Michigan’s The Eastern Gate is a quintet of college friends who played together throughout their college experience; cutting and releasing an album in January, 2009, Seraphim, as their “final act” together. As fate would have it, the band shot into the Top-200 downloads on Amazon.com within hours and hit #1 on Amazon’s Movers and Shakers chart. Now the band is adding dates in and around their home base, and I would imagine reconsidering whether they really want to give up on The Eastern Gate just yet.

If you enjoy bands like The Tragically Hip, The Psychodots (Bears) or Our Lady Peace then you will find a lot to like here. The album opens with Whirlwind, in the style of Our Lady Peace. It’s a solid rocker with fair commercial presence. Still Sailing On is a key track, it’s a very active, driven tune, although the mix isn’t ideal. Come Along is more orchestral in composition/arrangement. It is a soft and sentimental track that displays some of the expanded range of the band. News is and upbeat blues rocker built around some tremendous violin fills and a great hook. Suspend Me and Rock N Roll Nun are my two favorite tracks on the album. Suspend Me sounds pretty much like The Tragically Hip with a violin player, whereas Rock N Roll Nun is very much in the mid-western style of The Psychodots (The Bears without Adrian Belew).

The Eastern Gate might just be kissed by fate. Their sound isn’t necessarily one that will be embraced by all listeners, but it might have enough appeal to take them a long, long way. Their eclectic, big rock sound with Celtic and Blues elements is unique and interesting and fresh in the music marketplace. Seraphim is very much worth checking out.

You can learn more about The Eastern Gate at http://www.theeasterngate.net/ or www.myspace.com/theeasterngatemusic. Currently, Seraphim is most accessible in digital formats from outlets such as iTunes, Amazon.com, or Napster. Hard copies are currently available at shows and will soon be available through http://www.amiestreet.com/.
Posted by Wildy at 5:00 AM

Hi, this is Noah Kerr (lead guitarist/songwriter from The Eastern Gate) -- I'd like to thank you for your thoughtful review, and for helping share the music.