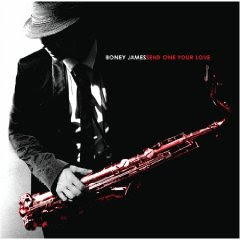 Boney James is prolific. Thirteen albums in seventeen years, including four RIAA certified gold albums, four #1 albums and three resulting Grammy nominations is quite a track record. James cut his teeth touring and doing session work for the likes of Morris Day, The Isley Brothers, Randy Crawford, Ray Parker Jr. and Bobby Caldwell. Boney James is for all intents and purposes the founding father of urban jazz, and has influenced an entire generation of jazz musicians. His latest release, Send One Your Love, is a theme record based on the sort of music Barry White and Marvin Gaye made their own.

Send One Your Love opens with the smoothe sounds of Wanna Show U Sumthin’. Breaking down the barriers between jazz and pop with a slow jam vibe, Wanna Show U Sumthin’ makes a great listen. Send One Your Love is a bit lighter, set in an exquisite arrangement full of layered sounds. Stop, Look, Listen comes back to an acoustic base that seems to work best with Boney James’ sax. Don’t Let Me Be Lonely Tonight is pure soul, featuring newcomer Quinn (Atlanta, Ga) on vocals. Quinn has pipes that rank up there with Seal, and this arrangement works to feature his distinctive voice perfectly. City Of Light is one of my favorite tracks here. Boney James is inspired on this one, dancing in and out of the arrangement like the life of bees.

You can learn more about Boney James at http://www.boneyjames.com/. You can pick up a copy of Send One Your Love at Amazon.com or wherever music is sold.
Posted by Wildy at 5:20 AM