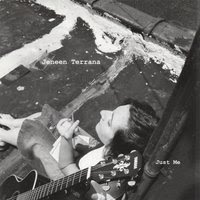 We previously reviewed the exquisite My Creation from Jeneen Terrana And The Howl Brothers. She must have liked what we wrote because she sent along her earlier album, Just Me. Terrana is based in New York City these days, but started out singing in her home town of Buffalo, NY. She has a disarmingly honest and personal songwriting style that will leave you on the edge of your seat. I was very curious to hear what Terrana was like before her association with The Howl Brothers. One word: Wow.

Just Me opens with Good Folks, a quirky and shadowy guitar based tune about keeping up appearances. More specifically, keeping up appearances for your parents when your world maybe isn’t quite what they might have imagined for you. It’s wonderfully well-written; an honest and distinct story song filled with gloaming shadows. Up next is Are You Still In, an amazing song about showing your true self to someone in a relationship. Are You Still In is a fearless baring of flaws that is not so much based in vulnerability but a pragmatic, “I am what I am, can you deal with it?” perspective. It’s a starkly honest and powerful song.

Someone Has Been Loving You shows the same fearless approach. Terrana is confronting a lover who has not been faithful in a candid and pragmatic fashion that is far more devastating than anger. The end result is not set in song, but the foundation has been irrevocably shaken from its moorings, and Terrana is almost clinical in the diagnosis. Up next is F*** You, perhaps the best kiss off song you’ll ever hear. Based in true events, Terrana is ruthlessly honest in a peppy country/folk format. I bet this song is a trip live in concert. Goodbye is a delicious little acoustic blues piece about getting out of a relationship that doesn’t give you what you need. It’s a nice change of pace and a more subtle take on the subject covered in F*** You.

Cutting The String once again goes to the topic of breaking away. One suspects that perhaps this album was written around the time Terrana made the break from Buffalo to New York City, as the theme of breaking up/breaking away and starting new runs heavily through Just Me (hence the title). Cutting The String is lyrically dense and confessional in nature, a rough musical sketch that is beautiful in its earthy simplicity. I’m Fine turns the corner on leaving; a hopeful declaration painted in gorgeous harmonies and a buoyant vocal line against a neutral-to-melancholy musical arrangement. Terrana closes out the CD with a stunning rendition of O Sole Mio, displaying a range and theatric touch different than that displayed in her own material. Goosebumps is the word.

In going back to the earlier disc in Terrana’s catalog I expected to hear a developing artist who would turn into the one we heard on My Creation. Instead we find an artist fully formed, striking in her candid and confessional songwriting. The voice is the same; wonderfully nuanced and subtle but capable of striking power and grace. Just Me is every bit as good as My Creation. The development seen isn’t so much a growth in skill or prowess but a widening of stylistic choices. Just Me is a Wildy’s World Certified Desert Island Disc, and Terrana is just the second artist to have two albums gain that distinction. Get this disc.

You can learn more about Jeneen Terrana at http://www.jeneenterrana.com/. You can pick up a copy of Just Me at www.cdbaby.com/cd/jeneen.
Posted by Wildy at 5:20 AM