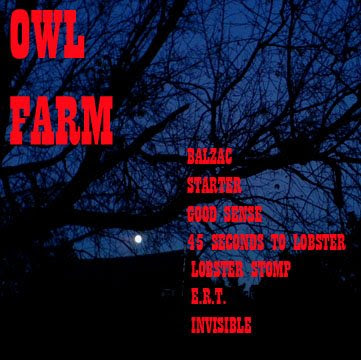 Owl Farm is an unsigned quintet from Kingston, Ontario, Canada. Drawing from Psychedelic, Punk and Melodic Rock influences with the occasional blues infiltration, Owl Farm creates primarily instrumental music that is varied and interesting. Their self-titled debut EP, Owl Farm, is a creative musical venture you’ll want to check out for yourself.

Owl Farm opens with Balzac, a series of guitar rock vignettes that morphs from rockabilly to Southern Rock to Grunge in something of a guitar rock history lesson. Starter builds in intensity as it seesaws from Prog to Grunge/Pop and back throughout; an interesting composition that makes use of some familiar chord progressions in ways perhaps you hadn’t thought to try them. Good Sense is an electronic composition based on a simple bass line/beat as served by a programmed keyboard. Owl Farm vocalist J-P makes his first appearance here in minimalist fashion. I have to say that this song was just a bit bizarre and is more like performance art than composition. 45 Seconds To Lobster is a punk rock soliloquy about food as escapism, one supposes. Again, amusing but bizarre.
The Lobster Stomp has a very garage sound and was likely as fun to play as it is to hear. Don’t expect to make much sense of it; it’s a musical romp for its own sake that periodically deteriorates into greater levels of madness before returning to its usual mundane level of insanity. E.R.T. is the closest thing to a sensible rock song on the disc, alternating between a repetitive and bland verse and a slightly less repetitive and bland chorus. Only in the logical drift of the occasional bridge does Owl Farm flirt with its usual chaos. Owl Farm complete makes up for anything resembling normal on Invisible. This is my favorite track on the album; a pure punk rock tune with almost Police-like minimalism (ala their early albums).
Owl Farm comes across as something of an art-rock band on the coincidentally entitled Owl Farm E.P. Energy is expended, crazy chord progressions are played, mad ideas presented and in the end a good time is had by all. Not everyone is going to get this disc, but if you were ever a fan of bands like The Dead Kennedys, Husker Du, Black Flag or any of the other punk denizens of late 1980’s college radio then you’ll love this disc. Owl Farm exceeds those bands for musicality on occasion, probably just to rebel, but their hearts are in the right place.

You can learn more about Owl Farm at www.myspace.com/owlfarmband. You can purchase the Owl Farm EP in digital format from Zunior.com.
Posted by Wildy at 5:10 AM