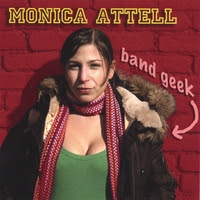 Monica Attell has quite the pedigree. She holds a masters degree from the Boston Conservatory of music in Flute Performance. She previously fronted the band Zeta Bane, one of the hottest bands in the Greenwich Village scene the first part of this decade. Of course there is also the family connection: performing runs in the family, with big brother Dave Attell setting the standard.

Perhaps not THE standard; Monica Attell has standards of her own to set. From the opening of Band Geek, her solo debut, it is very clear that there is more than one artistically powerful voice in the Attell clan. Band Geek is a musical oddity. The musicianship is incredibly tight, and includes perhaps the best rock flute this side of Ian Anderson. The lyrics are funny and jarring ala Ben Folds, and Ms. Attell’s vocals are powerful and cutting. There is literally no one quite like her in pop music today.

From the opening notes of “Be There For You”, it’s very clear that this is story telling on Ms. Attell’s terms. “Be There For You” describes that friendship we’ve all had with someone we truly can’t stand but for some reason continue to associate with. “In My Head” starts out sounding like something out of the Elton John songbook. “So True” is built on top of a driving piano intro that resolves into this incredible jazz/funk influenced chorus. Other highlights include “Nineteen”, “Drunk Girl”, and “Don’t Really Know”, and my favorite so far, “Rising Sun”.

In truth, there is not a weak song on Band Geek. This CD should be in the hands of the masses, and is a workshop for all who would be Indie Rockers. The music sounds like it was written and performed for the love of the music, without agenda, and without a specific plan to say something. The end result is an honest and authentic work of modern rock/pop.

No one can guarantee fame or riches in the music business, but Monica Attell deserves the stage and your attention. Catch on to her now, before her star takes off!

You can purchase Monica’s CD through CDBaby (http://cdbaby.com/cd/monicaattell) or pick it up at one of her shows!

Notes: Monica Attell will be performing live at Rain Ultra Lounge in South Norwalk, CT on Friday, January 25, 2008 at 9:00 PM (http://www.rainaultralounge.com/ for more info). Ms. Attell will also be performing at an industry showcase in New York City on February 5th, 2008. If you want additional details you can catch up with Monica at www.myspace.com/MonicaAttell.
Posted by Wildy at 7:33 AM

wow she was my music teacher... shes a horrible teacher and a complete feminist

what's wrong with being a feminist? Nothing, keep it to yourself. She is an amazing teacher.