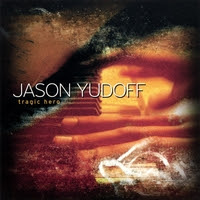 Jason Yudoff just cracked the list of my twenty favorite songs, and that's saying a lot. Tragic Hero is a melding of diverse musical styles, including jazz, funk, R&B, and southern/prog rock. That combination could either be an unpleasant mismatch or a bit of musical genius. Let's just say that Jason Yudoff comes out looking pretty smart.

Tragic Hero opens with a Casio keyboard progression that makes you think, "Oh no, not again." Just as you're finishing that thought, the aural landscape explodes around you. All too often tragic heroes are judged on first impressions. Here we learn just fifteen seconds in what a fool that can make of all of us. "Good Enough" opens sounding like something Phil Collins might have written in the early days of his solo career before being bitten by ballad-itis.
With clear easy vocals and a keyboard style that falls somewhere between Ben Folds, Andy Creeggan and early Dennis DeYoung, Jason Yudoff paints a musical landscape that is unusually complex and diverse in popular music. Tracks such as "Get Up", "Room To Breathe", "Too Late Janie" and "Locked In The Box" make you want get up and dance. "You Should Be My Girl" is an optimistic plea, whereas "5 More Minutes" might fall on the same relationship arc much later on, where pain and longing merge into desire for one more chance.

Far and away the standout track for this reviewer is "Dirty Deed". This little gem starts out with acoustic guitar, drum and cowbell as a sparse counter to the charged narration of man caught up in an obsession he can neither obtain nor relinquish. "Dirty Deed" is one of the most radio-ready tracks I've had the pleasure to review thus far, and I would not be surprised to hear this song top out in Top-40, Adult Contemporary and Modern Rock formats.

Tragic Hero is a worthy opening salvo from an artist I am sure you'll all be hearing more of in the future. The reviews I have done up to now have all been on worthy artists which niche sounds. Jason Yudoff has a sound that will appeal to the masses if things break his way. Get on the train now, and you can say you knew him when…

You can purchase Tragic Hero at http://cdbaby.com/cd/yudoff3. You can learn more about Jason Yudoff at http://www.jasonyudoff.com/ , or www.myspace.com/JasonYudoffandthenewhotness. Jason will be playing at The House Of Blues in Los Angeles, California at 9:30 PM on Thursday, January 17th. He will also be gracing the stage at LA's The Mint on Saturday the 19th. Check him out if you're in the area!
Posted by Wildy at 9:04 PM