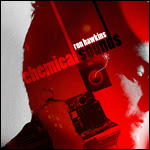 Ron Hawkins – Chemical Sounds2007 Ron Hawkins
Ron Hawkins has long been part of the Toronto Indie Rock Scene, whether as part of The Lowest Of The Low, Ron Hawkins & The Rusty Nails, or on his own. He has always had an ability to write incredibly catchy alt-rocks songs. More than this, the man has a unique lyrical gift. I once referred to Ron Hawkins in another forum as the Bob Dylan of our generation (albeit lesser known). I still stand by that assertion.

Ron Hawkins’ newest release, Chemical Sounds has done nothing to mitigate my esteem of his songwriting abilities. If anything Mr. Hawkins has always shown a maturity beyond his years as a lyricist. On Chemical Sounds he takes a turn toward even greater depth.

While the songs may have mellowed just a bit from his earlier releases, the emotional wallop delivered by “Anonymous” and “A Brief History” is undeniable. “Anonymous” is perhaps the most poignant love song I’ve ever heard, and yet avoids saccharine sweetness or cliché. “A Brief History” is the song I want played at my funeral, and manages somehow to sum up the meaning (or lack thereof) of life in three minutes and forty seconds: “And the simple truth resounds that our time goes by so fast. From the frightening first until the sweet, sacred last.”

It is hard to pick a true standout track here, as I have yet to hear Ron Hawkins pen a bad song. For rockers, “1-800-Radio”, “Smile And Wave”, “From The Alto Loma Hotel”, and “Out Of The Black” are where it’s at. For more mellow introspection, check out “Anonymous”, “A Brief History”, “1994” and “Flickering”. These songs will turn you inside out.

This is songwriting so far removed from his peers, performed by a consummate performer with an incredibly tight backing band. You must own this CD.

You can learn more about Ron Hawkins at http://www.ronhawkins.com/. You can purchase this and other releases at http://www.victimlesscapitalism.com/.
Posted by Wildy at 9:24 PM