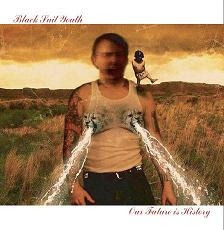 I have just listened to one of the most promising hard rock discs to grace my CD player in a long time. The band formerly known as “The New York Dynamite” is a dynamo, a powerhouse you can’t, or shouldn’t, ignore.

The fact of the matter is that in a day and age where many hard rock bands have converted to Creed-esque balladeering in order to gain radio airplay, Black Suit Youth is making music to please themselves. In the process they may have made a CD incredible commercial potential. Black Suit Youth market themselves as “alternative/post-punk”, but I think the mistake is trying to put a name on it at all. The songs are catchy and they rock. This is pop music with a hard edge. Think Spacehog ala “Resident Alien”, with the frenetic energy of early Police recordings, and you’re at least in the neighborhood, if not the ballpark.

Black Suit Youth plan on making their way on their own. They have a very strong DIY bent, and have toured the East Coast extensively.

Highlights are ‘We Are Lions”, “Generation X”, “Five One Six”, “Who’s To Blame”, and “Here Goes Nothing”. The opening guitar riffs of “You’ll Never Die In This Town Again” signal that Black Suit Youth have not just come to entertain you. They plan to mesmerize you, carry you off and make you serve their evil purpose. The ride will be worth it.
Rating: Buy it Now!
You can get the full album or any of the individual tracks on I-Tunes. If you want more information on Black Suit Youth, including gig dates, check out: www.myspace.com/blacksuityouth. Also note that a new Black Suit Youth album is expected in 2008!
Posted by Wildy at 2:52 PM