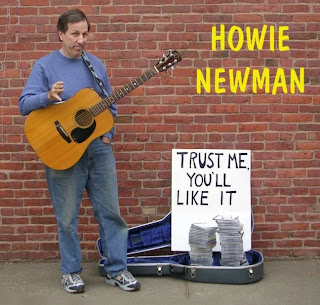 Howie Newman – Trust Me, You’ll Like It
2006 Major League Records

Boston-based singer-songwriter Howie Newman has put together one of the best backing bands in the Boston scene, including members of the Swinging Steaks, the new Black Eagle Jazz Band, and a member of Aimee Mann’s touring band who also formerly played with Mary Chapin Carpenter). We’re talking major league talent here, and that’s appropriate, because Howie Newman is a major league performer.

Trust Me, You’ll Like It is funny, sometimes poignant, and entertaining. It runs the gamut from bizarre (an ode to former Red Sox 1st baseman Doug Mientkiewicz) to sweet (“Middle Age Love”), with all stops in between. Some might almost call this a comedy record, but I think a better assessment would be to say that Howie Newman is a musician who tells you some funny stories about life.

Most anyone over 30 will understand the sentiment of “Weekend Warrior”, whether you are one or not. “Never Say Never” is a look at growing up, and how we sometimes we pass by our greatest pleasures in the name of being mature. Re-discovering those pleasures can re-kindle the fire fore life.

Mr. Newman even throws in a shill, “Please Buy My Record”. The humor on Trust Me, You’ll Like It is wry and self-effacing. “Snow” displays how a childhood boon becomes an adult burden. “Big In Belgium” is a funny musician’s answer to anyone who asks “why are you still doing this?”

Trust Me, You’ll Like It is a great family album, perfect for kids from 1 to 92. It is a mirror in which we all might find a little of ourselves, our family, and our day-to-day. The music is excellent. The songs are funny and warm. You’ll find yourself pulling this disc out from time to time when you need a step back. Definitely a keeper!

You can learn more about Howie Newman at www.geocities.com/howie.newman. You can order any of his recordings there (he has several), and he’ll even autograph them for you! Single songs are also available for download on iTunes for $0.99 a song.
Posted by Wildy at 7:05 AM