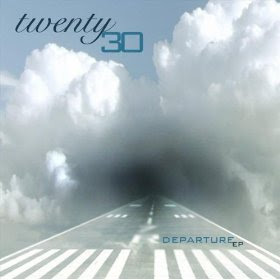 Twenty30 is a four piece outfit from Philadelphia playing Rock N Roll with a punk attitude and relentless energy. Building a following from regular airplay on http://www.indie104.com/ and live shows, Twenty30 appears poised to break out on the national scene. Their debut recording, Departure, was release in July 2008. Departure includes six songs mixing modern rock edge with a punk mentality and classic rock finesse.

Departure opens with Pay No Attention, a boisterous rocker with two vocalists (one singer, one screamer). It's a surprisingly tuneful song with decent commercial potential. Departure sounds a lot like stuff from other bands you might hear on The Edge or other Modern Rock formats, but there is this underlying Spacehog feel to Twenty30 that saves them from sounding formulaic. This becomes clearer on Wait Don't Wait, which is built on some impressive pop hooks and the sort of bombast Spacehog was so good at. Say It Like You Mean It has a pop/thrash style to it that is very accessible but also likely to appeal to fans of hard core music. Choke is a mellow tune that really outlines the Spacehog comparison on Departure. The song serves as a declaration of sorts but fails to really say anything. Giving Everything returns to the power chord format that Twenty30 seems so well versed in. The pop sensibility seen elsewhere just doesn't quite make it here however. Departure closes out the set; it's a big guitar-driven tune with memorable hooks and a driving rhythm that make it very memorable.

Twenty30 shows a penchant for pop hooks in hard/modern rock arrangements that are intriguing. Their sound is just a bit rough, which works as a DIY punk/Modern rock band. Twenty30 doesn't show a lot lyrically here, and the music is not virtuosic by any means, but Departure is a good, solid Rock N Roll EP.
Rating: 3 Stars (Out of 5)

You can learn more about Twenty30 at www.myspace.com/twentythirtyrock. You can download the Departure EP either through Amazon.com or iTunes.
Posted by Wildy at 5:00 AM

this was a great review, your very detailed and express the feeling of songs really well thank you!

I must say that I may have to check this band out. It sounds like something many of my friends would be into. The Philly music scene is seeing a revitalization of sorts and bands like tis are appreciated.