From time to time I will pull a title from my own collection of Indie and/or lesser known bands to review. These are albums that are on my own personal Desert Island list; discs I just wouldn't want to be without. There's no specific schedule for these. They'll just come up as they come up. Enjoy. 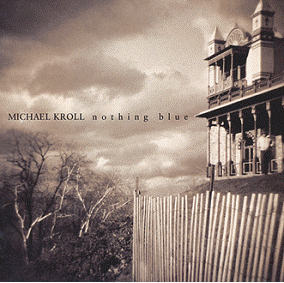 In 1994 I attended a Tori Amos show at Buffalo State University where the scheduled opening act was The Devlins. I had been unimpressed with the proposed opening act and was not disappointed when it was announced The Devlins' bus had broken down and would not make the show. As a replacement, Seattle singer/songwriter Michael Kroll walked out on stage with no backing band except his acoustic guitar. This guy we'd never heard of kept the entire audience transfixed for the next 30 minutes as he created an orchestra of sounds from one guitar to support his subtle and intelligent story songs. Kroll was touring in support of his debut album, Nothing Blue, which was a consumate Americana/pop album before anyone knew what Americana was.

Nothing Blue opens with In God's Acre, a song that will ring true in any rust belt or working class town. Kroll's voice rings true to the working class ethic that rings throughout Nothing Blue, with just a hint of gruffness within a wonderful textured tenor. Independence Day Again explores the difficulties that Veterans face against the backdrop of a celebration of the gains their sacrifices wrought. It is one of the most sensitive and serious explorations of this difficult topic I've heard in song; endlessly melodic and rich in musical composition, Kroll hit an absolute grand slam with this one.

Pilgrim Soul is the consummate love song. This is absolute mix-tape material, and sadly one of the most overlooked songs in pop/rock music. Pilgrim Soul could be a hit in any era from the 1960's on. I'm truly surprised that this song was never licensed for film or television. Speed of Sound is almost a companion piece to Pilgrim Soul. Where Pilgrim Soul is a celebration, Speed Of Sound is a reverential prayer made from need. This song will haunt you. Walking The Fence describes the ambivalence the narrator feels about a reckless relationship. It's another song with significant commercial potential that was born 10-15 years too early.

Close Your Eyes is probably the most touching and hauntingly beautiful song on Nothing Blue. It's a song about regret that will get inside your head and won't go away. It's one of those songs that rings true for everyone who hears it in some way or another, wrapped in love and faith. 1001 is a stark explanation of a dream that holds some of the most involved guitar work on the album (that's saying something). It's a personal favorite of mine and likely to insinuate itself in your consciousness on one listen. Eastern Star is a wistful soliloquy about someone on the other side of the globe. It is particularly poignant in a time of war when so many loved ones are so far away.

We Can Only Be Lovers is a cynical song about misguided attempts at a relationship between two people who just do not match. The song is steeped in a bluesy feel that is part dirty regret and part remorse. We Can Only Be Lovers is very moving and honest without sounding trite. Nothing Blue But The Sky lends the album its title, and is probably the song that would translate most easily to a rock arrangement. The song is about determination and survival in a world where we all feel somewhat separated from one another. Trying To Say is perhaps my favorite track here. It just has a rhythm to it that drives the song, and is a rock song in acoustic format. It's just one of those songs that will run through your head at odd times even if you haven't picked up the album for months. Nothing Blue closes with Nobody Knows, a sober and sad song that could be the anthem for an old-timer in any working class town. Michael Kroll managed to capture the essence of the forgotten heartland of America in three-and-a-half minutes like maybe no one else has here.

In Nothing Blue, Michael Kroll created one of the quintessential albums in Indie Folk Rock, regardless of era. The fact that the album was largely overlooked is irrelevant. If you’re looking for the complete singer/songwriter/performer, then Michael Kroll hit the arc of perfection back in 1994. Nothing Blue is a Wildy’s World Certified Desert Island Disc, and one of my personal favorite albums.

You can learn more about Michael Kroll at www.myspace.com/michaelkrollmusic, where you can purchase a download of Nothing Blue as well as several other releases. I don’t know if hard copy CDs are available anymore, so you’ll likely have to look to eBay or Amazon for used copies.
Posted by Wildy at 5:00 AM

This is one of my all-time favorite albums. I've been searching online to see what Michael Kroll is up to, but haven't found much.