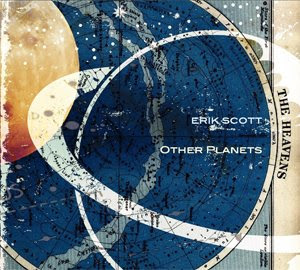 Erik "Eski" Scott has a long history of raising a ruckus. After sixteen years raising the rough reveille of youth with Sonia Dada, Scott has taken a little break to pursue other musical avenues. Along the way he's played with Alice Cooper, Flo & Eddie, Kim Carnes and Mavis and Pop Staples, just to name a few. Erik Scott's latest release, Other Planets, finds him dabbling with steel guitar, melodic bass and what he terms as "interstellar strings". Tranquility abounds on Other Planets, but that wild energy that has run through everything Scott has touched over the years is here, deep within the still waters of this musical moment.

Bartalk is built of the sort of ups and downs one might see in any microcosm of society. A bar is as good a random sample as any, and Scott captures the swell and release of human interaction perfectly in rise and fall of the musical passages within. Guitar and keyboard carry on the main conversation here, while passersby (keyboard, bass, drums) provide the background noise and occasionally spill over into the main conversation. The sonic imagery is almost perfect. Sundogs takes its name from the scientific phenomenon called a parhelion. Parhelia are the mock suns you sometimes see to either side of the actual sun usually shortly after sunrise or shortly before sunset. Sun Dogs were debated as portents in the middle ages, and have even been used as signed to start wars. They are coronal objects that result from sunlight reflecting off of ice crystals in the atmosphere; illusions. Scott's musical interpretation seems to play with the concept of illusion while perhaps implying a purpose unknown or unseen.

Peace On Saturn is one of the most pleasant surprises I've heard on an instrumental album in some time. Scott uses pedal steel here in an almost ambient setting that could be described as some sort of "heavenly" country music. The pedal steel sighs and wails its way across a serene musical landscape provided mostly by a conversation between bass and guitar. Despues De Guerro is my favorite track on the disc because it perfects the theme that Scott seems to be trying to draw out of all the songs on Other Planets. It's music as a conversation between instruments. This concept was put forth bluntly on the opening track, but the underlying theme is not so much of instruments playing together as conversing. On Despues De Guerro Scott achieves a near-perfect conversation where guitar, bass, drums and pedal steel all find perfect rhythm, pacing and content and lift the whole project to enlightened speech. (Not to mention that Pink Floyd fans will be very pleased with some of the passages in this one).

Not to drive a point too hard, but Erik Scott brings out his inner Floyd in flashes on Bassque Revolution (particularly in the opening). Bass is the primary voice in this wonderful composition, taking center stage while piano and keys egg it on and trill laughter throughout. Make sure to listen carefully to Foggy Bridges when you get there. The opening distorts sound like fog distorts sights seen in the distance, but the bass leads you where you need to go and the piano is as beautiful as sunlight illuminating the world through the mist. Bathing Maui comes across as a bit of a musical joke, delivered with a wink and a smile. Chaos ensues both in the tub and in the music, although in a much more refined fashion that fans of Scott may be used to. Bass guitar provides the laugh track for this one, while the keyboard suggests the sense of adventure that any dog owner will recognize come bath time. Scott gets full into the space rock ethic with Aliens Made Me Do This, the closing track to the album. Space age strings and a mischievous bass line make for quite a listen.

Erik Scott has always been known for his raucous side as part of Sonia Dada. On Other Planets he shows us a much more musically mature aspect that is both surprising and welcome. Instrumental rock albums always end up having something of a limited reach, but this is far and away one of the best instrumental rock albums I've come across. In the art of composition Scott has found a voice, one that speaks clearly and quietly to the listener. You must listen carefully to hear this voice, but the reward is well worth the effort. We here at Wildy's World sincerely hope for the continued vitality and success of Sonia Dada, but we also hope that Erik Scott continues to find time to explore his instrumental muse.

You can learn more about Erik Scott at http://www.erikscottbass.com/. You can purchase a copy of Other Planets at www.cdbaby.com/cd/erikscott or http://www.wishingwellonline.com/