Review: Jane Monheit - The Lovers, The Dreamers And Me 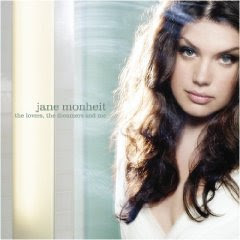 Jane Monheit - The Lovers, The Dreamers And Me
2009, Concord Records

Jane Monheit harkens back to the days of artists such as Sarah Vaughan and Kay Starr with her latest album, The Lovers, The Dreams and Me. Monheit burst upon the jazz scene in 2000 as an amazing ingénue. Nine years and nine albums later she is considered one of the pre-eminent female vocalists in jazz, and rightly so. Monheit has worked with the likes of Terrence Blanchard, Les Brown and Steve Tyrell while racking up appearances on Christmas At The White House, The Capitol Fourth Of July Celebration, The View, The Today Show and Letterman.

Monheit opens with a cover of Like A Star, finessing phrase after phrase into waves like those on the ocean. The ebb and flow here is tranquilizing; wrapping its arms around the listener and lulling you into Monheit's vocal grace. Fiona Apple's Slow Like Honey gets the Monheit treatment, turning the urgent edge of the original into a sentimental longing that is both less and more than the original. Monheit's at her best on This Girl's In Love With You. The full color and texture of her voice is laid bare on the most personal and lovely song on the album.

A sense of mischief infuses Monheit's take on Get Out Of Town. She's able to sell a sense of playful angst with this classic while delivering a primo vocal performance. Ballad Of The Sad Young Men is another beauty, with Monheit at the top of her game, and her backing band wringing everything they can out of the arrangement. The backing band here is perhaps one of the finest working jazz outfits going, bringing energy and life to even the most mellow of arrangements. Other highlights include I'm Glad There Is You, I Ain't Gonna Let You Break My Heart, Lucky To Be Me and Rainbow Connection.

Jane Monheit is one of the Great Ladies of Song, bringing grace and panache to a genre that's too often diminished in modern interpretations of classic material. The Lovers, The Dreamers And Me makes the most of even never material, placing it in a style and tenor that is at once period and timeless. Monheit scores big with this one. Somewhere Hoagie Carmichael is smiling.

You can learn more about Jane Monheit at http://www.janemonheitmusic.com/. You can purchase a copy of The Lovers, The Dreamers And Me at Amazon.com or wherever music is sold.
Posted by Wildy at 5:20 AM