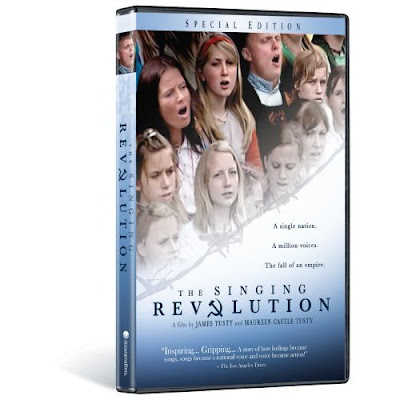 If you ever needed proof that music can change the world, then you need to put aside a couple of hours to check out The Singing Revolution. The Singing Revolution is the story of Estonian Independence from The Soviet Union and the role that singing nationalist songs played in the counter-revolution. Directed by James and Maureen Castle Tusty (both of whom co-wrote with Mike Majoros, The Singing Revolution captures the raw power and emotion of song, the call of freedom and power of the human spirit against the bleak background of human oppression.

20th Century Estonia lived under the thumb of Russia for most of the Century, with a brief interregnum of German occupation during World War II. Soviet Rule began in 1939 at the beginning of World War II as Russia sought to create a buffer (The Iron Curtain) between itself and Europe. During World War II alone, approximately 1/4 of the population of Estonia was killed or removed by the Soviets. Nationalistic songs became a source of strength to Estonians and residents of other Baltic countries throughout the Soviet reign of dominance in Eastern Europe. In 1986 and 1991, Estonians came to Tallinn for the Estonian Song Festival. Songs of National Pride and freedom punctuated Estonia's campaign to be recognized as independent states by the Soviet Union.
Within Russia, Mikhail Gorbachev was pursuing a policy of Glasnost. It would appear that Gorbachev got more than he bargained for; empowered by fervent love of country and song, Estonians advocated before a watching and listening world for their own freedom. The Singing Revolution documents the growth of the Estonian independence movement between 1986 and 1991 and how it was empowered and enriched by the singing of these (banned) nationalist songs. This musical march to independence was accomplished without the loss of a single Estonian life.

The transformative power of music is captured by Mr. Tusty and Mrs. Castle Tusty through the use of archival footage from the Soviet occupation in contrast with interviews of movement leaders and residents of Estonia. And of course, there’s the singing. The film runs 94 minutes and is narrated by Linda Hunt with music by John Kusiak. If you are not moved by this film then you are not watching or listening. The subject matter may be a little dry for some, but the powerful emotions inspired by the non-violent fight for freedom in Estonia is overpowering at times. For those of you who make music, this is the ultimate sign that music can change hearts, minds, and even the world. The Singing Revolution is a rousing documentary.
Rating: 4.5 Stars (Out of 5)