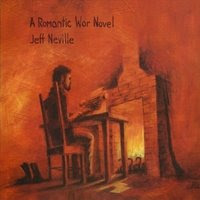 Lisle, Illinois Jeff Neville knows two of the most vibrant and divergent music scenes in the United States. Growing up in the Chicago market, Neville headed to New York City for college, and ended up part of the vibrant East Village/Lower East Side music scene. Years after returning to Chicago, Neville has a regular gig as keyboardist for Soul/Rock favorites The Midnight Shows. At the age of thirty seven he finally got the bug to put out something of his own. A Romantic War Novel, Neville’s solo debut, mixes dark and light, shadow and bright in a collection of nine story songs that are just Neville, his piano, and a guest trumpet on two tracks.

A Romantic War Novel is a musical offering painted in dark overtones, mixing pop aesthetic with gothic intent; as if Robert Smith and Colin Hay decided to get together for a weekend and write some music. The result is sometimes tragic, sometimes enlightening and generally entertaining. Neville's delivery is more like the morose days of Smith than the maniacally energetic Hay, particularly on the opening track, Watch Her. Neville has something of a story-teller streak in his songwriting, but the story falters on watch her. Between the nearly atonal vocal line and the robotically charismatic delivery, he just doesn't get off to a great start. Luckily things improve significantly on What She Said To Me; a wonderfully tuneful arrangement that bespeaks of a melody line that Neville just isn't quite up to delivering. Neville compensates by donning a Lou Reed style spoken word style that's full of casual style and chutzpah. Likewise Yours Truly, a song that sounds like a Tori Amos piano composition. Lyrically awkward but theatrically intense, the song crashes about and makes quite an impression like a party guest two shots too deep into the house liqueur; two much for the atmosphere but too likeable to make leave.

Neville moves back into aesthetic territory with Your Stubborn Pride, a pretty piano prologue that builds into a vindictive diatribe. Its likely epilogue, It's Over, is a mellow center stage soliloquy built on a Ben Folds style composition. Lyrically sophomoric, this particular track would be much more enjoyable as an instrumental. It's all part of the see-saw nature of the album. Crests are followed by troughs, with the occasional moment of parity between strong songwriting and ill-defined lyrical craft. One of the most interesting compositions here is Tonight, which plays with multiple keys and/or strong dissonant composition at times. The musical phrases here are pleasant to listen to, and the lyrical content is at or near its best on Tonight. You'll also want to check out Let It Drop and Take Me Back.

Jeff Neville isn't a wunderkind singer, sticking more to a talk/sing style that works for him. His lyrics are hit or miss. At times he has a way with words and other times... well, you get the idea. What really works here are the musical compositions themselves. Neville is a talented composer on piano, showing a broad range of styles and musical influences. He also seems to understand his instrument's voice, when to use it, and when not to. It would be very interesting to hear Neville working in a band setting. One imagines that working with other talented musicians he could be part of something quite special. As it is, A Romantic War Novel is a work of interest. It's not pretty, it's got some rough edges, and not everyone will see it, but it just might be a diamond in the rough.

You can learn more about Jeff Neville at www.myspace.com/jeffneville. You can purchase a copy of A Romantic War Novel at www.cdbaby.com/cd/nevillejeff.