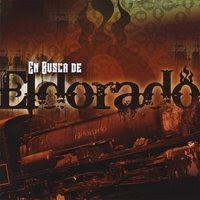 Madrid has a secret, and it’s one that won’t keep. Madrid might just be home to the best new classic metal band around. Fans of Rainbow, Deep Purple and even Whitesnake will want to take note, Eldorado is the real deal. Combining a killer rhythm section with soaring guitar riffs, big choruses and a charismatic lead vocalist in Jesus Trujillo, Eldorado has found a winning Rock N Roll formula. Their debut album, En Busca De Eldorado, was produced by Richard Chycki whose worked with such august artists as Rush, Seal, Aerosmith, Sum 41, Kid Rock, Def Leppard, Pink and Dolores O’Riordan.

Eldorado mixes heavy blues, rock and classic 1970’s metal sounds into a musical patois that is both comfortably familiar and at the same time new and edgy. En Busca De Eldorado is eight tracks deep, with seven in Spanish and one in English. Even if you don’t speak Spanish, the musical language here is universal. En Busca De Eldorado opens with Abril, which has a real Def Leppard feel to the verse. Crushingly melodic guitars drive this song home while Trujillo goes soul-metal in a performance that is highly memorable. Guitarist Nano makes the point that he’s a force to be reckoned here with some incredibly hot soloing. Whereas Abril has a brooding core, El Final springs out of the gates with a lively beat and takes to the open road. Eldorado is a well-oiled machine here, rocking for all they’re worth. The harmonies on the chorus will hearken back to a time when most hard rock acts could really sing.

Un Mal Presentimiento sounds like something you might have seen on MTV in the hair band days of the mid-1980’s. Eldorado doesn’t skimp on the quality here, building a layered sound that is both melodic and edgy. Dejame Decirte sounds like a big rock ballad, fairly typical for the genre, but Trujillo’s vocals keep it more than interesting. En Busca De Eldorado goes for the big, soaring guitar sounds you might expect from Ronnie James Dio, although the song itself is a bit more polished and commercial than Dio might end up with. My favorite song here is El Jugador. Eldorado reaches down and grabs hold of an infectious blues core on El Jugador and refuses to let go. The result is a song that just won’t get out of your head. Mistreated is the only English Language song on the album, dealing even more keenly in a blues-heavy hard rock sound. You can tell the band is having fun on this one, waltzing into Prog territory with the song structure and even stepping on the toes of Led Zeppelin in a musical dance you won’t want to miss. The album closes with Identidad, the most ambitious rocker on the album; sure to be a concert favorite.

Eldorado is one of the most resilient and hardest rocking classic hard rock bands on the scene today. The fact that most audiences in the new world have never seen them aside, Eldorado is a band to watch. With a growing Latin American population and the addition of a few more English language songs, Eldorado may be on the precipice of jumping of the EU and taking over the rest of the Western Hemisphere. En Busca De Eldorado is amazing.