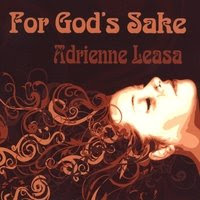 Adrienne Leasa isn’t your typical rock singer-songwriter. Eclectic is probably the word I’m looking for, but even that doesn’t quite fit right. She doesn’t come across as flashy. Leasa tends toward the lush sound style that made Sarah McLachlan a household name, but also carries the emotional honesty and neo-folk spirit of Kathleen Edwards. The Spring City, Pennsylvania native cuts a path that meanders from folk to blues to ethereal rock and roll, changing like the wind. Leasa’s debut album, For God’s Sake runs the gamut from starkly beautiful and emotionally raw to serenely polished.

For God’s Sake opens with the title track, a straight forward rocker built up with lush harmonies. The melody is on the cusp of memorable, but the harmonies weave a distinctive sound that trails in your mind once the song is done. Leasa moves on to What Comes Next. Her voice isn’t your typical rock voice, falling somewhere in between Edward, McLachlan and almost but not exactly Kate Bush. This is exceedingly clear on What Comes Next, another straight forward rocker that’s got a heart-on-the-sleeve quality to it. Shame is where For God’s Sake really starts to take on a distinctive character. The near-ambient arrangement is almost chilling. Leasa builds a harmonic bridge that includes her voice and keyboards that is the musical equivalent of the movement of glaciers. At first glance (listen) not a great deal of movement is occurring, but underneath the surface the energy is immense.

Cloud Of Dust is my personal favorite on For God’s Sake, exploring Leasa’s bluesy side while maintaining the harmonies that seem to be something of a trademark. Cloud Of Dust is barebones; acoustic guitar, lead and harmony vocals. This setting seems to be where Adrienne Leasa shines most, as her voice is more affecting here than at any point on the album. Deity goes back to the straight forward rock arrangement (ala Shawn Colvin) for a song full of doubt and angst. Leasa returns to the blues on I’ll Get My Way, essentially proving that the blues is probably her home base. Other highlights include Song For A Prisoner, Lucy and Reside.

Adrienne Leasa is distinctive in voice and style. Her songwriting is above average with a couple of flashes of greatness. Leasa sounds like she’s still finding her voice artistically, with stylistic choices that dance across the map in an almost haphazard way. It’s refreshing. Adrienne Leasa may not have entirely figured out who she is yet as an artist, but it’s clear that she knows what she’s not. Eschewing the polish and over-production of a major label release, Leasa allows the honesty and clarity of her songwriting shine through. For God’s Sake is a great debut album that defies you to classify it, much as the artist defies you to classify her. Adrienne Leasa should be making music for some time to come.

You can learn more about Adrienne Leasa at www.myspace.com/absorbedinthespring. You can pick up a copy of For God’s Sake at www.cdbaby.com/cd/adrienneleasa.
Posted by Wildy at 5:00 AM