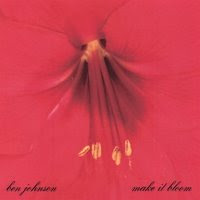 Ben Johnson's involvement and training in music runs the gamut from opera to jazz to world music to rock n roll. One of his previous bands, a salsa act named Mambo Jumbo opened for the Dave Matthews Band during the 2002 Olympics. His musical experiences and exposure lead to Make It Bloom, a diverse and wide ranging album full of sounds you may not always hear on one album, but which work amazingly well together for all of that. Johnson plays bass and sings on the album, but also recorded all acoustic guitar and piano parts in the studio. He's joined by Anthony Phan on Rhodes Piano, trumpet and vocals, and Randy Herbert on drums.

Johnson gets off very much on the right foot with New Sonata. This is an amazing pop song that is so catchy it might invoke a quarantine. Imagine if Ben Folds wrote happy pop songs and you get the general idea ("Boom shadda shadda boom boom shadda / I found paradise within your personna / Boom shadda shadda boom boom shadda / You're the kind of inspiration for my new sonata"). Pulling a prompt 180, Johnson launches into the maudlin love song Untame. It's a hard change of pace, as its difficult to rectify the Johnson we hear on New Sonata with the one we hear on Untame, but both songs work in their own right. Way Back East is a melancholic pop tune with bright/dark ambivalence that makes it an intriguing listen.

Up With The Flow has a quirky feel to it that is charming. The rhythmic acoustic guitar arrangement underneath keeps this one moving until the chorus kicks in with muted pop grandeur. One of my personal favorites here is Life, Easier. Johnson unleashes the funk on a limited basis here, with a guitar riff opening that's as nasty as they come. This one is something of a guitar anthem on the chorus, with minimal instrumentation on the verses. Internal Bleeding heads back into Ben Folds territory, sounding like an outtake from Rheinhold Messner. Other highlights here include O Town, Equilibrium and Way Back East.

Ben Johnson brings a fun and quirky sense to his music, highlighted by a real flair for the essence of pop music. Lyrically he presents some awkward moments at times, but these are almost more notable as marks of his musical character than flaws in writing. The song New Sonata is something special. In New Sonata Johnson has created one of those pop moments that either spark long and successful careers or memorialize bands as one hit wonders. It all depends on what follows of course, but New Sonata is an IT song. The sort that, released to pop radio in late spring/early summer with the right push could dominate the airwaves all summer long. If Johnson has anything else up his sleeve along that line he'll be with us for a long, long time. Even without New Sonata, Make It Bloom is a worthy effort.

You can learn more about Ben Johnson at www.myspace.com/benjohnson1975. You can pick up a copy of Make It Bloom at www.cdbaby.com/cd/bjohnsonmusic.
Posted by Wildy at 5:20 AM