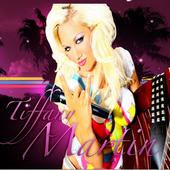 Orlando’s Tiffany Martin has already had a lot of success in her twenty-three years. As a four-year member of Monsters In The Morning, Central Florida’s #1 rated radio show, Martin has proven her comedic chops (Monsters In The Morning is carried nationwide on XM Radio channel 152). Martin has been a powerhouse vocalist all along, and in 2008 she puts her musical hat in the ring with her debut album, Tiffany Martin. The album mixes Pop and Rock N Roll in a swirl of bubblegum bombast.

Complicate Things kicks off Tiffany Martin's self-titled debut; a Pop/Rock hybrid in the style of Chantal Kreviazuk. This is a commercial tune and a likely first single, but doesn't really stand out from the sort of stuff you're likely to hear on popular radio. Consecutively tries to build on the rock edge with a slightly darker sound and themes. Martin is a fine vocalist with real power and presence and does her best to carry the song, but the song itself is just a little too mundane to save. It's not bad, it just doesn't stand out. Wonder Woman mixes Rock, electronic pop and Soul styles for what is likely a near-perfect commercial storm. Martin shines on this song vocally, displaying a vitality and energy that has been less than clear to this point, but the material itself is still average.

I don't generally go this far, but Cloud We're In is awful. All due respect to Ms. Martin, but this is about as cliche as pop music can get. I don't know if it's the original writing or what happened in the production booth but this was just flat out difficult to listen to. Suffice it to say it's probably the most commercial song on the album and likely to be a big hit. Let Me Go, on the other hand, shows what Tiffany Martin is capable of. The first thirty seconds sound like a ballad will ensue until the song devolves into a pop/punk tirade reminiscent of Avril Lavigne. Martin has a truly gorgeous voice. It is evident that this album is her grab at pop stardom, and the song choices here reflect that priority. The material is frankly beneath Martin's level of talent; either that or the production team took whatever respectable musical nuggets were available for this project and brought out the most base qualities in each.

The end result is a truly talented artist who is hamstrung by her songs/producers. This is the sort of album that tends to do very well on pop radio, but popularity has never been a necessary guide to quality. Don't be surprised if a few years from now you see/hear a revamped Tiffany Martin performing a different style of material, and don't be surprised if she knocks your socks off. The talent is here, but this album sells her short.

You can learn more about Tiffany Martin at www.myspace.com/tiffanymartinworld or http://www.tiffworld.com/, where you can purchase a copy of Tiffany Martin.
Posted by Wildy at 7:17 AM