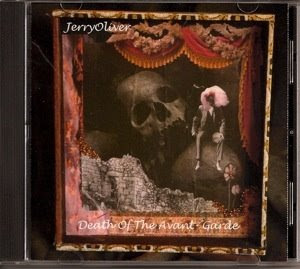 Minneapolis native and current Nashville denizen Jerry Oliver has been making music for a number of years. As a member of bands as diverse as The Cherokee Rose Band, Peculiar Red and Pushin’ Daisies, Oliver has released/recorded several albums, toured extensively and even been featured on a regional compilation. These days Oliver teaches guitar at The Musicians Hall Of Fame and Museum School Of Music in Nashville, in addition to gigging extensively. In February of 2008, Oliver released Death Of The Avant-Garde.

Death Of The Avant-Garde opens with the Hot Coals after a short prelude. Oliver sets the tone with big guitar and sitar evolving into a straight up rock tune with lyrics that are unimaginative and uninformative. Death of The Avant-Garde turns out to be a wonderfully Prog new wave tune. This will get people up and moving whether on the radio, in a club or on the stage of a stadium. Out Of Here is a bit slower getting through the verses but the refrain is ultra-catchy. Fact Or Fiction? is a mellow and dreamy introspective song that devolves into an occasional discordant fit. Ripped Yellow Shade wants to rely on a style that's part old school gospel.

Jerry Oliver is a capable vocalist, and the music on Death Of The Avant-Garde is interesting in composition. The musicianship here is first class, and the songwriting ranges from Great! to Okay. Death of the Avant-Garde is a fun listen and definitely worth checking out.
Rating: 3 Stars (Out of 5)

You can learn more about Jerry Oliver and purchase a copy of Death Of The Avant-Garde at http://www.jerryoliver.com/.
Posted by Wildy at 5:00 AM