Review: Movin' Melvin Brown - The Magic Of You 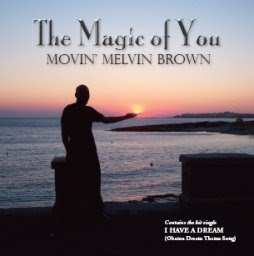 Movin' Melvin Brown may just be the last of the great song and dance men. His shows are an artists' depiction of what might happen if the likes of Same Cooke, Louis Armstrong, The Platters, James Brown, Ray Charles and Bill "Bojangles" Robinson all took the stage together for one night. Brown sings, dances, taps, clogs and performs comedic soliloquies in the course of a stage show that leaves audiences begging for more. Brown isn't just a mimic, he practically inhabits the memories of artists such as Sam Cooke and Ray Charles, as if the late, great stars stood before you on stage once more, if only for one night. Brown's 2007 release, The Magic Of You, finds Brown moving from persona to persona as he navigates his way through 17 vibrant tunes that run the gamut between Soul, R&B, Rock N Roll and the Blues.

Brown has added a newer song to The Magic Of You in honor of Barack Obama. I Have A Dream (Obama Dream Theme Song) is an update of the great Martin Luther King, Jr. speech as inspired by Obama's historic run for President of the United States. Whoto Man is an overtly political song that reads like a diatribe against dishonorable politicians. This kind of modern, mostly spoken-word material doesn't fit quite so well with Brown's persona. The same can be said to a degree about Communication. It's a great message steeped in cultural politics, but the message in this case overpowers the singer. People, on the other hand, finds Brown more in his element, with classic R&B vibes and a nasty funk bass line and Brown losing himself in the classic sounds.

The Magic Of You finds Brown channeling Ray Charles so close to true you'll do an aural double take. One of the true highlights of the disc is the jaunty My Love Is Real. The arrangement almost borders on cheesy at times, but Brown is spot on in one of the best performances on the album. Master Of The Beat gets Brown into full funk/disco mode with a country flavored guitar lead. It's an odd tune but wonderfully entertaining to listen to. There's almost a Creedence Clearwater Revival "Swamp Rock" thing going on here. I Ain't Got Time is another favorite. Movin' Melvin Brown is absolutely vocally inspired here. Other highlights include Can You Feel and Special.

Movin' Melvin Brown translates pretty well to CD, but my guess is that there is nothing quite like a live show with this man. Nevertheless The Magic Of You is quite a treat. Brown is at his best digging into a classic R&B or Blues sound, but is more than competent on everything else. There are a couple of slow moments on the album, but in general it's a fine offering. The Magic Of You is recommended for all ages, as much of the music Brown is practically universal across generations A great listen.

You can learn more about Movin' Melvin Brown at http://www.movinmelvin.com/ where you can purchase a copy of The Magic Of You.
Posted by Wildy at 5:00 AM