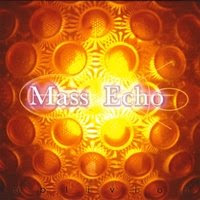 Mass Echo explodes out of your speakers with Doorajar, a musical fracas incorporating Eastern sounds with electronic effects and a Drum N Bass floor. The song practically does a slow implosion rather than end. (Oops) Into Wonder is a pensively vibrant composition focused primarily on keyboard/synth permutations of rhythm. This song of seeking rides its own waves of inquiry through rough musical waters that wash up into frenzied rock guitar runs and then into reticent alt-rock poses before burning out into a Pink Floyd-style neural/aural tease.

What becomes abundantly clear very quickly is that Mass Echo is given to fits of musical metamorphosis that are wonderfully jarring and disturbingly beautiful to witness. In much the same way that later Beatles material simply broke down barriers between music styles (and compositional rules), Mass Echo goes where they wilt, without rhyme or reason or any external sign of why. The results tend to be chaotic, exasperating and ultimately fulfilling. Songs like Overseer confine barely controlled rage into dark and shifting sonic elements that range from the forebear to hard rock to electronic smudgery.

You'll want to check out The Bell, a sonic water color with alarming tendencies toward electronic and vocal bombast. The chanting and arrhythmic pulsation of the synth heart bespeak of a dance on the edge of lunacy. Be sure to also check out Augmented, played in part on a ghostly piano and an arrangement that expresses disturbance beyond the usual human capacity. Other highlights include Cobwebs, By The Horns, Pole Shift and Lounge.

Mass Echo might properly be dubbed (pun not intended) the first of what I am certain will be many Progtronic bands (those who compose and perform electronic music but with the sort of compositional tendencies found in hard-core Progressive Rock). Mass Echo can change direction with the wind (or in spite of it), leaving the listener to either be lost at sea or grab on for dear life. The choices made on Oblivion are surprising, disturbing and deeply informative of the musical mind of Mass Echo. Mass Echo follows their muse wherever it takes them, without fits or filters. The results are glorious. Mass Echo obviously mixes ambient and electronic here, but they may be the most exciting and vibrant electronic artist in a decade. Oblivion is highly recommended.

You can learn more about Mass Echo at http://www.massecho.com/ or www.myspace.com/massecho. You can purchase a copy of Oblivion at www.cdbaby.com/cd/massecho.
Posted by Wildy at 5:00 AM