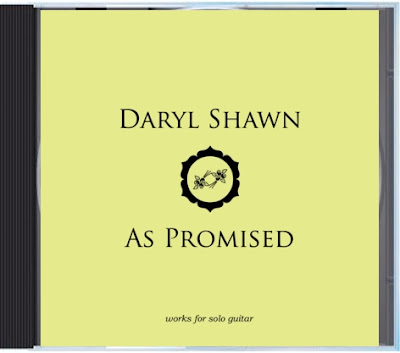 Daryl Shawn could be described as a musical chameleon. He is able to shift gears betweenRock, Jazz and Classical without a thought. Shawn never picked up a guitar until he was 16 years old, but appears to have been born to play it. After two years at Berklee studying Jazz, Classical and Flamenco guitar styles, Shawn uprooted himself from the San Francisco Bay area to Oxaca Mexico. Shawn continues to write songs and hone his craft there, but regularly returns to the US to share his music with audiences across the country. His latest release, As Promised, is full of beautiful instrumental guitar compositions that you're going to want to hear.

As Promised is a conglomeration or projects. Eleven tracks on the disc were composed as a wedding suite for a friend, while the others are unrelated compositions Shawn felt were strong enough to include here. Daryl Shawn has created a thing of beauty in the wedding suite (Tracks 1-10 and track 17), seeming to mimic the rise and fall of a relationship from inception to the culmination of the wedding day. Interstate is a rambling composition that seems to draw a musical parallel between the river of cars and the great rivers that carry water to the sea. The same sense of peaceful rolling and rocking is implied here in a very complex yet serene arrangement. Do Me A Favor is a strong composition with clear energy and a highly rhythmic structure and a memorable melody line dug deep into the chord progressions. It's not the most complex song on the album but probably one of the more enjoyable.

Oakland Azul allows Shawn to show off his finger-picking style in a minimalist and lovely arrangement that takes some interesting melodic turns. As Promised is a Suite composed of three movements. The first movement, Andante, has a baroque feel to it that you could easily imagine being played on harpsichord instead of guitar. Moderato has some of that baroque styling but also wants to break out in a James Taylor style folk/rock tune (but doesn't quite). Adagio is a love song played under moonlight, full of reverence and reverie. It is by far the most beautiful composition on the album. All In is a quiet expression of joy with an almost baroque sense to it. It could be a very cool processional that elevates slowly into a quiet yet exuberant joy.

Shawn changes gears on Danza Del Campo, breaking out a Latin flavor and high energy that demands that you get up and dance. Bride Of The Winter Plains reminds me somewhat of the early Windham Hill recordings (Michael Hedges) with its upbeat tenor but disciplined classical approach to composition. Other highlights include Center Of The Country, Lynda's Cannon and Montage.

Daryl Shawn shows distinct ability as a guitarist and composer. Dancing lightly back and forth across the chasm between pop and classical stylings, Shawn manages to create some magical moments along the way. As Promised began, at its core, as the celebration of the marriage of two people who love each other more than the morrow. Darryl Shawn communicates this with beautiful musical imagery that reflects and refines the day of marriage into a musical prism we can all enjoy. The additional material on As Promised simply outlines the range that Shawn is capable of, and of a talent that should provide more great listening in the years to come.

You can learn more about Daryl Shawn at http://www.darylshawn.com/. You can purchase a copy of As Promised at kunaki.com. You can download the album from Emusic or Amazon.com.
Posted by Wildy at 5:00 AM