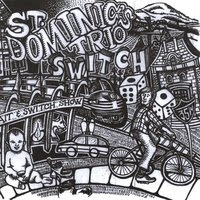 Minnesota rockers St. Dominic's Trio offer up a mix of original songs heavily influenced by a classic rock sound with the occasional to modern mores. The Minnesota based band (which is not, in fact, a trio) has been a local club favorite for some time but has started to branch out in the last two years. Switch is their debut album, and provides a picture of a band with a distinct musical taste and a chameleon-like nature.

Switch opens with Free And Alive, punctuated by 1970's Chicago (the band) style horns. Free And Alive is a happy romp with a driving rhythm and lots of peripheral instrumental action. 4th Day Of May is a straight forward classic rocker that draws from early R&B sounds. I Thought We Were Friends is in a similar vein with the addition of that delicious horn section. There's an Elvis Costello vibe here that is somewhat muted but unmistakable. She Loves You Anyway is a tasty bit of Americana that is a perfect vessel for vocalist Terry Walsh. Bike Ride of 35W has a southern/swamp rock feel to it. The song is quite catchy and certain to have you up and dancing.

Outta Bullets reflects a little more attitude and oomph from St. Dominic's Trio, dealing in a blend of Blues and Rock N Roll that is sure to please. This is what AC/DC might have sounded like if they originated in the early 1960's. Be sure also to check out Cold Dice and the effecting One Day. One Day is perhaps the finest composition on the album -- every listener will recognize this aural photograph in someone they know.

St. Dominic's Trio have made the jump from classic rock bar band to creative force. Switch is a capable album with a number of decent songs and one or two real standouts. In the current market this is not a highly commercial release, but is very listenable and should find a solid fan base for St. Dominic's Trio. One Day is a special song that could carry St. Dominic's Trio a long way (similar to how The Time Of Your Life established Green Day as a serious artistic band as opposed to a reckless punk outfit). Switch is definitely worth checking out.
Rating: 3.5 Stars (Out of 5)

You can learn more about St. Dominic’s Trio at http://www.belfastcowboys.com/. You can purchase a copy of Switch at www.cdbaby.com/cd/stdominicstrio.
Posted by Wildy at 5:10 AM