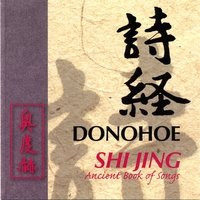 Donohoe is the performance name of New York City based World musician Colin O’Donohoe. Majoring in jazz drumming at Arizona State University, Donohoe found Chinese orchestral music and felt like he’d been reborn musically. What has followed is an almost insatiable appetite for musical cultures and styles. Donohoe tackled the Shi Jing for his debut album, taking poems from the 4,000 year old collection and setting them to music that utilizes a combination of traditional Chinese instruments in conjunction with modern synth, bass, drums and vocals. The resulting album, Shi Jing: Ancient Book Of Songs was released in 2006.

Shi Jing opens with Minnow Net, a song about turning the tables on a betrayer (in love). The attempt here it to take an almost soul style vocal juxtaposed against an ambient background covered with big rock instrumentation and eastern sounds. The sound is compelling and vocalist Kathryn O’Leary makes the song. Strike The Drum is a highly rhythmic composition with spoken word overlays. This one sounds more like a form of noodling, with little or no direction or coherent imagery coming out of the music. Moon Rising, on the other hand, is a very clear impressionistic view that the title accurately reflects. The ambience and ethereality of this piece are sure to make it a fan favorite. Gathering opens with a spoken word section that appears to be back-masked. This is more of a distraction than anything as the composition itself has a sparse beauty that is to be admired. Gathering is almost like a dream sequence in which the images fly by you faster than the eyes can accommodate, but somewhere deep within the mind they coalesce into coherence. Other highlights are Storm, Heaven and Northern Wind.
Donohoe has created a surprising album in Shi Jing. There are no real disappointments here, but there are few real Wow! moments either. Shi Jing is a pleasant listen. The best moments involve vocalist Kathryn O’Leary, who sounds like she might have Wagner on her resume. Shi Jing: Ancient Book Of Songs is recommended for relaxation and easy listening.

You can learn more about O’Donohoe at http://www.donohoemusic.com/. You can purchase a copy of Shi Jing: Ancient Book Of Songs at www.cdbaby.com/cd/donohoemusic.
Posted by Wildy at 5:00 AM

Wildy,
Thanks so much for taking the time to review both of my albums. I really appreciate what you have to say about them.
Thanks again,
Colin

I saw so much helpful info here!