Artist Feature: Spirit Of The West 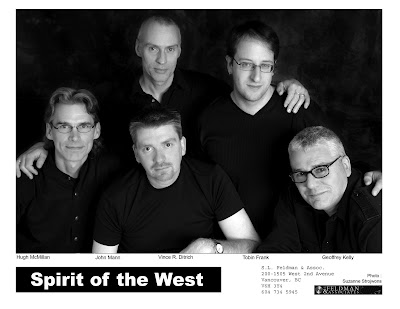 Spirit Of The West is the Wildy’s World Artist Of The Month for January of 2009. They’ve been making great music for 25 years, starting out in 1983 as a Vancouver folk trio named Evesdropper. Original members Geoffrey Kelly, John Mann and J. Knutson built a sound steeped in Celtic musical traditions that defined Spirit Of The West's early years and is evident on the first two albums, Spirit Of The West (self-released, 1984) and Tripping Up The Stairs (Stony Plain Records, 1986). Knutson left after Tripping Up The Stairs to be replaced by Linda McRae and current member Hugh McMillan. The band's third release, Labour Day (Stony Plain, 1988) contained the hit single Political. This commercial splash led to the band signing with Warner Canada and releasing Save This House, which spawned two popular singles (Save This House and Home For A Rest)

As Spirit Of The West faced the onset of the 1990's, there was a desire in the band to expand their sound. They were inspired to branch out while touring England with The Wonder Stuff; wanting to fill concert halls with sound the way The Wonder Stuff did. Consequently Vince Ditrich was pressed into service. With a new drummer and a new sound, Spirit Of The West marched forward with Go Figure in 1991. Go Figure saw both a broadening of Spirit Of The West's popular appeal as well as the estrangement of some longtime fans that were unhappy with the move from folk to rock. A prime point of comparison is offered on Go Figure, as Spirit Of The West's first hit single, Political was reinterpreted here as a rock song. Disgruntled fans actually went so far as to present the band with a petition at one point during the tour supporting Go Figure demanding Spirit Of The West play the original version of Political. 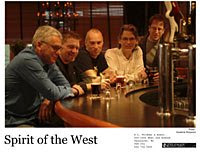 1993 was a commercial plateau for Spirit Of The West. It began with the selection of Canadian super-producer Michael Phillip Wojewoda (also responsible for the Barenaked Ladies' Gordon). The resulting album, Faithlift completed the transition from folk band to mainstream rock band and sparked the band's biggest single, And If Venice Is Sinking. Spirit Of The West had other radio singles from Faithlift, including Sadness Grows and 5 Free Minutes. The marriage of Spirit Of The West with Wojewoda brought out the best in both.

Spirit Of The West returned in 1995 with Two-Headed, a darker, more mature effort that succeeded in artistry but failed to have the commercial legs of Faithlift. In 1996, Spirit Of The West released Open Heart Symphony with the Vancouver Symphony Orchestra. Perhaps the most stunning and courageous recording of their career, Open Heart Symphony was a collection of original songs written for the symphony performance, rather than a recapitulation of hits with orchestral arrangements. If fans and critics weren't aware of it before then, it became rapidly clear that Spirit Of The West had something special going for them in the song craft department.

1997 saw Spirit Of The West transplant themselves to England, and Martin Barre's personal studio for the recording of Weights & Measures. Guests included Barre (Jethro Tull); Karen Matheson and Donald Shaw (Capercaille); Ric Sanders (Fairport Convention); Martin Bell (The Wonderstuff) and Duncan Moss (Page & Plant, Shave The Monkey). Weights and Measures revived some of the Celtic roots of Spirit Of The West while continuing the development of their sound that began with Go Figure. Production was again handled by Michael Phillip Wojewoda.

A seven year hiatus saw band members pursue other musical projects, acting gigs and just living semi-normal lives, but Spirit Of The West returned in 2004 with Star Trails, a well written and performed album that received positive critical response but unfortunately just did not have significant commercial presence.
Along the way there have been three compilations of Spirit Of The West Material. 1989's Old Material: 1984-1986 captures live performances of songs from the ill-fated indie debut (which is long out of print) as well as early concert favorites. 1999's Hit Parade is your proto-typical Best Of collection featuring three unreleased songs from the Open Heart Symphony recordings. In 2008, Rhino Records Canada released Spirituality: A Consummate Compendium (1983-2008). This two-disc set captures highlights of the band's twenty-five year collective history, including rare tracks and two new songs produced by the aforementioned Michael Phillip Wojewoda. Not unsurprisingly the album peaked at #10 on the iTunes Canadian charts.

Spirit Of The West was inducted into the Western Canadian Music Association Hall of Fame in 2008, recognition of twenty-five years of ground breaking music as one of the pre-eminent alt-rock acts in Canada. For 2009, big things are planned, including a new studio album, a live DVD, and a recasting of the Open Heart Symphony shows. We are working on getting a review of Spirituality up this month, and hopefully a review of the new album (and maybe even the live DVD) as they are released this year. On a personal note, Spirit Of The West have long been one of my favorite bands, and it is with great pleasure that we present them as our January 2009 Artist Of The Month.

You can learn more about Spirit of The West at http://www.sotw.ca/ or www.myspace.com/spiritothewest. 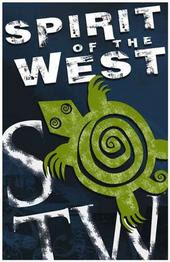 Thanks for the heads up. It is freakin amazing.