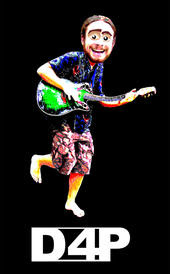 Floridian Dan Miller has been doing the coffee house circuit for about ten years now, honing a laid back, neo-hippy folk style that fans of Bob Dylan or Keller Williams would appreciate. In 2006, Miller (performing as Dan4President, or D4P) took time out from the road to record his debut EP, Passion Fruit & Bamboo. Having discovered the wonder of looping technology, Miller was able to essentially become a one-man band, adding layers of sound and instruments to his heart’s delight.

Passion Fruit & Bamboo opens with the title track, a straight up acoustic rocker with some unusual instrumentation. Miller's vocals are gruff and soulful, serving to almost mask the lyrics, which seem to aim for a descriptive form of Zen but come across as awkward and clunky. Travelin' Song is a neat arrangement for acoustic guitar and drums. Steeped in a funky rock setting, D4P delivers the rapid-fire lyrics with precision and skill. This is a very catchy tune and a likely fan favorite. The West Is The Best is another ultra-catchy rock tune in acoustic form about a near-tragic brush with the law.

I Don't Mind finds D4P flipping on the amplifier for some funky, blues guitar work flourishes as accent to the acoustic setting. While You Were Gone is probably the most commercial sounding track on Passion Fruit & Bamboo; a pop/rock nugget that could easily cross over to country. The poignant lyrics and easy deliver of vocalist Dan Miller makes this song a hidden gem! ONoTherIGo is another acoustic rocker that will give you a strong desire to dance. Bombs Away has a bit more of an overtly political air to it. The musical composition is strong, but on the lyric side it’s a bit awkward in the same sense that the opening track was. It's almost as if you can tell which songs D4P is trying to have a message on as opposed to the songs that may have just happened. The songs with a forced message sound, for lack of a better word, forced.

D4P is very talented. Five of the seven songs here work wonderfully well. The other two are good, but a bit on the awkward side lyrically; almost as if the songs came to D4P, but in the process of creation Miller tried to make these two songs into something other than what they wanted to be. When, however, Miller listens to his muse and doesn't try to imprint himself on the songs, the results are incredible. D4P is a highly energetic and entertaining performer. Passion Fruit & Bamboo is a great introduction, warts and all.

You can learn more about Dan Miller at www.myspace.com/d4pband or http://www.dan4president.com/, where you can order a copy of Passion Fruit & Bamboo using PayPal.