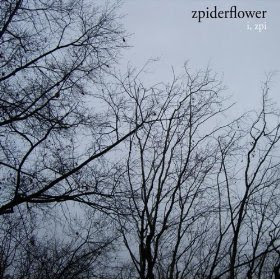 Zpiderflower is the alter ego of Seattle’s Alex Trzyna. His release as Zpiderflower, I Zpi, is a step away from his previous work as part of various Indie Rock outfits (Secret Stairs, Kiss Her For The Kid, Mr. Twit, Red Velvet Relief and Leanne Wilkins Band). Trzyna had complete artistic control of I, Zpi, and played/programmed all elements himself.

I, Zpi opens with More Streets, a straight up mellow rock tune informed and filled with guitar riffs and drum loops. It's a pleasant listen but doesn't captivate the listener, relying on repetition of the same progression over and over to lull the listener into a sense of comfort. Darling Don't Take That follows a similar path, although Zpiderflower does mix up the instrument (sound) mix about two minutes into the song. Zpiderflower maintains the same rise and fall of chords for nearly three-and-a-half minutes in an uninspired series of repetitions. Catching starts out a promising note on acoustic guitar. As other instruments become involved the guitar loses its vitality and what starts out as a vibrant composition sinks back into the mediocrity of repetition. Zpi is an exercise in sound with little or no structure. A Problem starts with a promising riff on acoustic guitar, but quickly sinks into the art of repetition. 1981 falls to the same sort of looping chord progressions.

Zpiderflower plays in a mix of organic and electronic sounds where much can be done that was impossible before the dawn of the digital age. Unfortunately there is little compositional effort expended here, with looping chord progressions that sound like fancy versions of Casio pre-programmed tracks. There is a lot of potential in these sorts of compositions -- in the age of computers the choices are nearly endless, but Zpiderflower appears stuck. This may be fine for background music, but this ultimately is at best pre-programmned backing track material. Little or no compositional freedom or creativity is noted.
Rating: 1 Star (Out of 5)

You can learn more about Zpiderflower at http://www.zpiderflower.com/. You can purchase I, Zpi as a download from Amazon.com.
Posted by Wildy at 5:00 AM