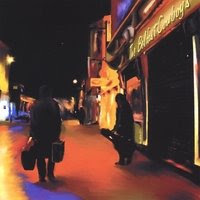 You don't often find cover bands cover in a forum such as this for a two distinct reasons:

1.) Cover bands often don't release albums;
2.) Albums by cover bands don't tend to sell well outside of the band's geographic base as most fans of the covered artist would prefer the originals.

There are exceptions of course. Luther Wright & The Wrongs in particular pulled off a coup covering Pink Floyd's The Wall (Rebuilding The Wall) a few years back, and Diana Ross' Lady Sings The Blues soundtrack is a classic cover album, but it's difficult (and often a mistake) to try and reinterpret an iconic artist's catalog for commercial gain. You tend to offend the hard core fans who are your primary market. Minneapolis' The Belfast Cowboys are a Van Morrison cover band who released their self-titled debut in December of 2008. Not only do The Belfast Cowboys do Van Morrison's material justice, they capture the vibrancy and energy of Morrison from his Them days.

The Belfast Cowboys opens with Cleaning Windows (Minneapolis version); its true to the original version while adding some local flavor. The Funk/R&B underpinnings of this song are as fine as Morrison ever imagined and it gets the album off on the right foot. The album's second song, Wild Night is a treat. Lead singer Terry Walsh performs a bit of musical transubstantiation here, nearly projecting the essence of Morrison for the first of several performances on The Belfast Cowboys. Walsh leads the band through reverent and coherent readings of Into The Mystic, Real Real Gone, Bright Side Of The Road and several other Morrison classics but hits a musical climax on Jackie Wilson Says. The whole band is inspired on this song and you forget for three minutes that you're listening to a cover band. Other highlights include Bright Side Of The Road, Caravan and Precious Time.

The Belfast Cowboys are a first class cover band. Walsh and crew provide a window on Van Morrison the performer 35 years ago. The energy and joy of that young man have been replaced by the wisdom and serenity of the consummate performer who is still musically active today, but longtime Morrison fans will appreciate this honest and reverent look back on the young man he was. It’s a great recording.
Rating: 3.5 Stars (Out of 5)