Review: Dog Gods - I Am Large; I Contain Multitudes 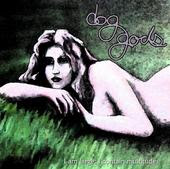 Arkadelphia, Arkansas is a small town of about 10,500 residents that has nonetheless produced no less than four NFL Football players. An old salt mining town, "The Arc Of Brotherly Love" has now produced an interesting musical conglomerate in the Dog Gods. This Folk/Americana band has a unique songwriting style and sound that is pure musical nirvana. Marck L. Beggs (vox, guitar, songwriter); Jason Chism (keys, production); Phillip Taylor (bass); Luke Pittman (lead guitar) and Craig Seager (drums) create lushly energetic and intelligent songs that are unlike anything you've heard in popular music. Dog Gods debut CD, I Am Large; I Contain Multitudes was self-released by the band in 2008. Its fifteen songs of quirky, catchy and unusual folk pop you don't want to miss.

The album opens with Another Day, a highly catchy and smartly cynical song. It's great Americana rhythm to it that makes you want to get up and two-step. Antarctica is my favorite song on I Am Large; I Contain Multitudes. Antarctica is 3:24 of Pop/Folk perfection, and reason enough to by the album on its own. The Man Who Mistook His Wife For A Hat borrows its title from a book by Oliver Sacks (Patch Adams) of the same name. It's a humorous story song that will leave you laughing and shaking your head in enjoyment. Ploughing The Moon has a great melody you're not likely to forget any time soon.

A second favorite here is Ireland Suite. Ireland Suite is very strong on Americana roots. This is destined to be a crowd favorite, and shows flashes of style similarities with Great Big Sea. Valentine For A Bi-Polar is a classic. The arrangement is wonderful and the lyrics alternative between ironic humor and straight forward suffering love song. Satellite Radio Blues has a Doors feel to it and is a very enjoyable listen. Other highlights include There's A Light At The End Of This Train; Disgrace - David's Lament and Blue Cats & UFO's.

You can learn more about Dog Gods at www.myspace.com/doggods. You can pick up a copy of I Am Large; I Contain Multitudes at www.cdbaby.com/cd/doggodsmusic or http://www.indierhythm.com/.
Posted by Wildy at 5:10 AM