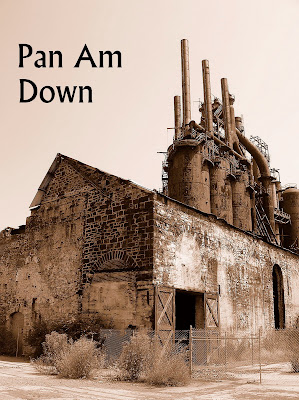 Pan Am Down is the musical nom de plume of Joshua Kraemer, a singer/songwriter who pays his bills courtesy of the New York City Transit (NYCT) System. Previously a member of Earthling Records recording artist Ultra Cindy (Norfolk, VA), Kraemer has spent the last four years keeping residents, commuters and tourists moving around the great city of New York. His experiences and relationships there (including not a few stories from co-workers) have infused and inspired his songwriting. On February 17, 2009, Pan Am Down will release their as-yet-unnamed debut album. In the mean time, we have a delightful little nugget entitled Three Songs EP.

Pan Am Down is not derivative, but don't be surprised if comparisons to bands like Wilco or Son Volt keep coming up in your mind. The sound is a blend of Americana, Rock and singer-songwriter sensibility that leads to the creation of smart and intricate story songs. Kraemer has a pleasant voice to listen to as well, which is always a bonus. Boise is a celebration-in-advance of a home coming full of expectations of love. The song wraps up a regret for lost time and a hope for love recaptured that is surprisingly poignant considering how common the theme is in popular music. Kraemer's honest and open vocal performance and heartfelt lyrics turn what could be a cliche love song into something special that listeners will respond to. I Know You Realize is a straight ahead Americana/Rock tune that is a pleasant listen but doesn't really stand out. Tomorrow's Silence bookends the EP steeped in angst and loneliness. It's a well-written tune that gets mired in its own delivery; lacking the energy seen and heard on the first two songs. A pretty melody, but just a bit deflated in the end.

Pan Am Down is the latest output of expression for singer/songwriter Paul Kraemer. Kraemer shows a maturity and lyrical grace that you might not expect from an NYCT employee if you had to take the Subway every day. This EP shows great promise for the upcoming full length release and for whatever lay beyond that. Pan Am Down may not be the most popular of name choices, but expect the band to garner a lot of attention over the next few years. The Three Songs E.P. is a great start.

You can learn more about Pan Am Down at http://www.imperfectsmilerecords.com/.
Posted by Wildy at 5:00 AM