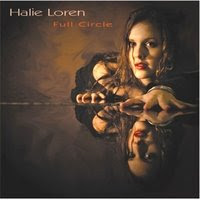 Halie Loren is a name you should remember. The 24 year-old Alaska native and Eugene, Oregon resident has already released three albums, amassed several songwriting awards (many while still in high school), and worked with some of the most respected professionals in the music business. She won Female Rising Star and Alternative Entertainer Awards through the Independent Music Awards before turning 16, and has been cited by both the Billboard International and John Lennon Songwriting contests. Equally adept at alternative rock and jazz, Loren is a bundle of musical surprises. Her debut album, Full Circle was released in 2006 to an unsuspecting world. Prepare to be bowled over.

Halie Loren is a performer very much in the mold of Tori Amos. Her intonation and vocal style is very similar to Amos', and her songwriting style is built on the same sort of piano flourishes and structure that Amos employs. The opening track, Maybe I'll Fly is a prime example of this. That being said, Loren does seem to have a little more soul in her sound than Amos manages and comes across as perhaps a bit more grounded. Alone is a powerful and moving song with a darkly sweet melody in a beautifully orchestrated arrangement (and also the best use of the word rivulets in a pop song). Sand is a personal favorite, dark in intonation and timber, the song is full of a powerful wave of emotion. This song will haunt you.

Loren launches next into an inspired cover of Joni Mitchell's River. Loren's alto reverently caresses this song to life in a version that's at least as good as the original. Pretty Truth is an amazingly well-written song about the illusions and myths people succumb to in the early stages of a relationship. It's a refreshingly honest song lyrically and the arrangement will blow you away. Kitty is a vindictive song about social pecking orders (think a musical version of Mean Girls for adults). Full Circle is a dark and powerful calling out song that makes Carrie Underwood's Before He Cheats sound tame by comparison. Loren lets another one of her influences slip through here as well, there's a definite Sarah McLachlan style to this song. Full Circle is the sort of song that Loren could still be playing to crowds twenty years from now without crowds ever tiring of it. The emotional energy in Full Circle is frightening.

Empty is also particularly worthy of a listen. Loren has fully embraced the darker side of human perspective fully by this point, and her nuanced voice perfectly shapes the twilight realm of human emotion that runs throughout Full Circle. Other highlights include Almost Even, Sisters and Lucky.

Halie Loren establishes herself as a presence with Full Circle. The alternative oriented rock feel here runs counter to the almost classically influenced piano bass compositions Loren pours her heart and soul into. Full Circle is stunning. Halie Loren doesn't sound like she's conveying emotion in the songs on Full Circle; she sounds like she's living through each painful moment as she sings. The result is an entirely compelling performance that should be required listening for anyone who wants to perform vocal music of any style. Halie Loren owns the listener by the end of Full Circle, which is a Wildy's World Certified Desert Island Disc. Make sure you check this one out.

You can learn more about Halie Loren and even purchase a copy of Full Circle at http://www.halieloren.com/.
Posted by Wildy at 5:10 AM