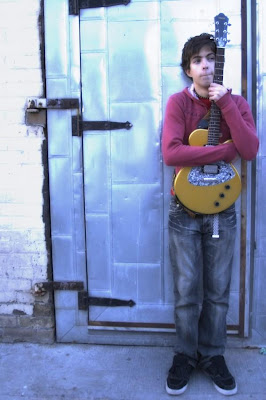 Justin McMillan - The McMusic Sampler
2009, Justin McMillan
Justin McMillan is a young upstart musician based out of Toronto who has a knack for catchy little pop/rock ditties that stay in your head for weeks. He was a runner up in the http://www.wearelistening.org/ 2007 Songwriter Awards and garners positive attention wherever and whenever he plays. McMillan is currently working on his debut album, The Style At The Time, due sometime in Spring of 2009. In the meantime, he sent along a little four song appetizer called The McMusic Sampler. Let’s check it out.

Justin McMillan leads off with Sleepless Eyes, a catchy, jangly bit of Brit Pop. There's an Elvis Costello and The Attractions air about this song, keeping to a simple, compact arrangement and a melody you'll be humming long after the song is over. Sleepless Eyes could go to pop/rock radio right now and get significant interest. Next up is In A While, keeping with the compact style, McMillan is shines in a wonderfully tuneful song that dances right on the edge of punk without ever leaving the realm of pop. Question To Ask You finds McMillan expanding his sound just a bit, opening up on guitar to accompany a song that is a tad more reserved. This is a song of courting and encompasses all of the nervous energy and suppressed excitement that goes along with such things. Say It To Yourself closes out The McMusic Sampler by amping up the music another notch. Say It To Yourself may be the unfortunate answer to Question To Ask You. The song is impetulant, unbelieving and thoroughly wonderful. The jaunty music arrangement stands in stark contrast to the lyrical content, and there's even a guitar solo that sounds like something that might have come out of Brian May's customized guitar.

Justin McMillan is an up-and-coming artist who deserves your full attention. His influences are quite obviously rooted deeply in British Rock And Roll, and he even has some of the same vocal qualities of a young Elvis Costello. The songs are full of life, with jangly, angular chord progressions and unforgettable melodies. McMillan just needs to keep knocking on doors, because before long one of them is going to open. The sky's the limit.

You can learn more about Justin McMillan at http://www.justinmcmillanmusic.com/ or www.myspace.com/justinmcmillanmusic. You can currently stream songs from The McMusic Sampler on McMillan’s MySpace page. Look for his debut album, The Style At The Time, available in Spring 2009!
Posted by Wildy at 5:10 AM