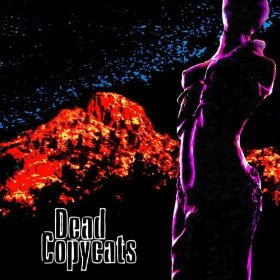 In the digital generation it's no surprise to find a band that came together through something like Craigslist, particularly not in a place like Brooklyn, NY. Jessica Braun (vox), Will Rossano (guitar), Jay Foote (bass) and Angela Webster (drums) make up this exciting young Indie Rock powerhouse. The band derives its name from a Charles Mingus quote: "If Charlie Parker were a gunslinger there'd be whole lotta dead copycats". In spite of the name, The Dead Copycats manage to not be terribly derivative, instead crafting a big rock sound that's steeped in classic rock and the Blues. The bands debut album, The Dead Copycats was released in 2008, and Dead Copycats will be touring extensively in 2009 in support.

Jessica Braun is a vocal powerhouse. She has the sort of voice that can rise above the maelstrom of guitar, bass and drums in the noisiest club and be heard. That becomes clear quite quickly on the opening track, Alone. The song itself is bit germane, but does offer a great showcase for Braun's pipes. Things pick up on Strength, which keeps the pop/rock energy but has more of a sense of energy and urgency. The arrangement is very straight forward, and Dead Copycats are as tight as can be on this one. Who Knows is an entertaining song with distinctly pop leanings. Away From Me is a big power rock song based in the blues and finds Braun at the top of her game. The band hits on all eight cylinders here in a performance that would have to be amazing in a live setting. Other highlights include Sunshine, Come Back, and a cover of Led Zeppelin's Since I've Been Loving You.

Dead Copycats offer up a strong debut with great pop sensibility and forebears in classic Blues based Rock N Roll. A tight, supple band backs up powerhouse vocalist Jessica Braun on the ten songs offered here, making for an incredibly enjoyable listen that is reminiscent of Michelle Malone in her days with Band De Soleil. Dead Copycats is a definite keeper.

You can learn more about Dead Copycats at http://www.deadcopycats.com/. You can purchase a copy of Dead Copycats at Amazon.com, iTunes, eMusic or one of several other online retailers.
Posted by Wildy at 5:10 AM