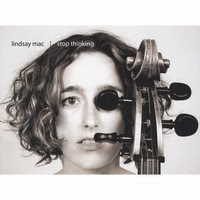 Born in Iowa amid rumors of Pork Tenderloin breakfasts, it’s hard to know whether anyone knew Lindsay Mac was destined for greatness. While gaining classical training in voice, cello and piano in school, it wasn’t until after school that she really found her musical voice. In spite of classical training from such august institutions as the Royal College of Music in London and The San Francisco Conservatory, Lindsay Mac one day decided to strap on her cello and play it like a guitar. Rumor has it that on that day the clouds parted, angels sang and a single ray of brilliant light shown down on cabin Lindsay Mac was living in at the time. While this story should be taken with a grain salt (particularly because I made it up) it is very clear that Lindsay Mac found SOMETHING that day. Stop Thinking is Lindsay Mac’s second full length release, and while we haven’t had the opportunity to hear her debut yet, it is easy to see that Lindsay Mac possesses a certain amount of that musical magic that separates a true artist from a mere musician.

It’s unusual to find a CD that keeps you hanging on each and every note, waiting breathlessly to find out what the artist is going to do next. It’s even more unusual to respond that way on the 2nd or 3rd listen, but that’s the reaction Stop Thinking demands. On Stop Thinking every song is a highlight. The album kicks off with the title track, a stark, comical look at compulsive thinking. As a first time listener I was blown away by this song, between the non-traditional arrangement, the singular nature of Lindsay Mac’s voice and the utter brilliance of the lyrics come as a sweeping and welcome surprise. Amazingly enough, Lindsay Mac doesn’t let up for eleven songs. Faith is a fast moving tune with introspective moments. Faith is discussed in pragmatic terms here, but the arrangement itself plays like a musical metaphor for the title. The greatest hints of beauty fall in the quiet moments between all the action when the writer and listeners psyche are left bear of cover.

Barbies & Broncos is a wonderful song about living life in the moment. It’s a quirky song that isn’t nearly as risqué as it may sound on first listen, and may be the finest pop song on the album. 7 Stones is a musical parable full of beauty and grace that are as unexpected as they are confirming. Up to this point Lindsay Mac has been a quirky pop genius who writes great songs; on 7 Stones she proves herself to be a great songwriter. You’ll find yourself drawn into this story like driftwood on the incoming tide. It’s a song of love and faith drawn from deep wells that aren’t visible on the surface of any one person. It’s an amazing song. Rain is one of the most involved arrangements on the album, using South American rhythms like those you might hear on Paul Simon’s Rhythm Of The Saints album. The song is pure genius.

Cry, Cry, Cry is a musical creation in three distinct parts. You would be hard pressed to find an ABC style arrangement with more disparate parts in popular music, yet the three individual creations come together to create pop music. The chorus in particular, with cello, banjo and clarinet taking the lead is an incredible listen. Up next is a cover of The Beatles Blackbird. Over the last several years this has become one of those songs that everyone covers, and in itself has become something of cliché. Nevertheless, Lindsay Mac gives the song a reading that is fresh and welcome that even hardcore Beatles fans will enjoy. You’ll also want to make a point of checking out Peppercorn and Pavement.

Whatever led Lindsay Mac to strap on her cello and play it like a guitar was a good move, there’s no doubt about that. It makes her a unique performer that sticks out in people’s minds, and the image is just one you won’t forget right away. But all of this would be for naught if Lindsay Mac didn’t display a certain level of talent for writing and performing songs. The fact is that Lindsay Mac is one of the most exciting new songwriters we’ve heard in some time. The musical arrangements of her songs on Stop Thinking are utterly brilliant. Her voice is quirky and memorable with a certain abstract beauty that makes you want her to just not stop singing. Lyrically Lindsay Mac tells stories in intelligent lines of musical prose, mixing in wit and color to raise her story telling to an art form. Stop Thinking is utterly brilliant. It’s a Wildy’s World Certified Desert Island Disc. Lindsay Mac is going places fast.

You can learn more about Lindsay Mac at http://www.lindsaymac.com/ or www.myspace.com/lindsaymacmusic. You can purchase a copy of Stop Thinking at www.cdbaby.com/cd/lindsaymac3.
Posted by Wildy at 5:10 AM