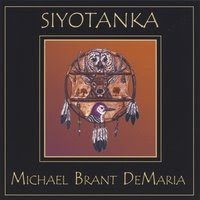 Musician, Psychologist, Professor and new age guru Michael Brant DeMaria has twenty-five years under his belt on the life-journey gig. The professor at the University of West Florida is a multi-instrumentalist who dove into music at the age of seven to heal his own wounds. On Siyotanka (the Lakota Sioux word for flute), DeMaria explores an almost metaphysical musical world. DeMaria finds an extraordinary balance between moving flute and drum duets and cinematic arrangements that bring in piano and organic environment sounds as well.

DeMaria is one of many therapists/artists currently in the market with music aimed at promoting healing or growth. Frankly, many of these offerings are less than thrilling musically. Many end up being vanity projects with marginal artistic value, although there are exceptions. Siyotanka is one such exception. Whether through the eerily beautiful passages of Siyotanka, the ceremonial gait of Grandfather, the ethereal mysticism of The Quest or the cinematic grandeur of Beyond The Known, the listener is in good musical hands. DeMaria doesn’t just string together notes or progressions; he grabs hold of the listener and tells a story in phrases and notes that speak to more than just the ears. The introspective moments are full of quiet beauty, and the more cinematic moments are reminiscent of the sort of scoring you might hear in a movie like The Last Of The Mohicans or Dances With Wolves.

Michael Brant DeMaria is one of those uber-talented folks that can achieve at high levels along multiple career paths. Suffice it to say that if he ever retires his therapists’ shingle, it would appear he has a strong secondary path to follow. Siyotanka is a thing of beauty.
Rating: 4 Stars (Out of 5)

You can learn more about Michael Brant DeMaria at http://www.ontos.org/. You can purchase a copy of Siyotanka in the store at that site or at www.cdbaby.com/cd/mdemaria3.
Posted by Wildy at 5:00 AM