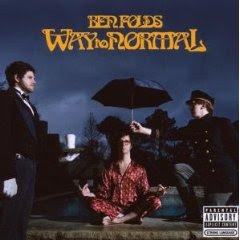 Ben Folds has walked the outer edge of pop stardom ever since the release of his first band's eponymous debut in 1995. Ben Folds Five reminded the rock world that pianos can rock, and also reminded rock and roll that its roots were in irreverence and true rebellion against the norm (not surveyed, pre-prepackaged rebellion at $18.98 per CD). Ben Folds has always told you exactly what he thinks, and has not mellowed (much) with success. Politically, fashionably and (sometimes) socially incorrect, Folds just tells stories his own way. Sometimes they're tongue in cheek and sometimes they're deadly serious -- you're never entirely sure which is which, but Folds is always brutally honest. Folds' eighth full-length release, Way To Normal, continues the brutal honesty, wit, intelligence and cutting edge pop/rock/punk style that Folds has become widely known for.

Folds has always been the bastard son of Billy Joel, embracing honesty and irreverence in the same fashion as many of Joel's classic recordings. Folds definitely has his own voice as a piano player and composer, but you can clearly see the lineage on Way To Normal. The album opens with Hiroshima (B B B Benny Hit His Head) details Fold's fall off of a stage in Japan. It's a funny story told in Folds' distinctive style with a sing-along chorus and memorable melody. Dr. Yang is the sort of frenetic composition that Folds' fans have loved since his Ben Folds Five days. The song would appear to mock all that we will put ourselves through in order feel our best. Folds teams up with the eccentric Regina Spektor on You Don't Know Me. You Don't Know Me has a metronomic quality to it and has actually become one of my favorite songs on the album. Spektor's voice is heavenly and wraps around Folds' voice like a snug undergarment.

Before Cologne is like a piano suite that introduces Cologne, which is one of Fold's most beautiful compositions to date. The serene melody and lush musical landscape created by Folds here stands in stark counterpoint to the storyline held within. Errant Dog is typical Folds. The song is funny and rough-hewn with the classic piano/bass/drums arrangement that seems to mark Folds at his best. Free Coffee allows Folds to turn his piano into the headwinds of funk, and also serves as the repository of the introduction to The Bitch Went Nuts. This is the most outlandishly funny moment on the album, continuing the tradition of tongue-in-cheek misogyny that Folds engages in from time to time. It's tongue in cheek because Folds is as much a misogynist as Randy Newman is racist. Both Folds and Newman have a little fun with fans and critics alike by creating true to life caricatures and giving them life in musical soliloquies that don't comply with the PC standards of the day. The song is well written and highly entertaining.

Brainwascht is a straight forward pop song done Folds-style with a little not-so-gentle irony thrown in for good measure. Effington starts out with a glee-club style chorus, complete with mixolydian harmonies. Effington is a vast word-play steeped in double-entendre and an almost Pleasantville-like vision. This may be Folds at his most musically creative. The song is stunning in it breadth of its vision and scope. I found myself in awe the first time Effington played, particularly because Folds is confident enough to marry what may be his boldest composition with a subject that is something of a humorous anecdote. Folds closes out Way To Normal with a return to his most personal and serious songwriting with Kylie From Connecticut. Once again we have a beautiful composition and lyrics that are based in a fractured relationship.

Folds may write about heartbreak better than anyone in the popular music sphere. When he writes about it in serious terms he avoids cliché and musical perseveration by drilling right to the heart of matter and speaking in unusually bold and honest terms. When he's writing from anger or humor (they're often the same), there's not a songwriter in Rock N Roll who's more entertaining. Way To Normal continues Fold's progression from punk rock pianist to consummate Rock N Roll composer. Folds embodies the near virtuosic composer status of Elton John and the irreverent rock toughness of Billy Joel, with a health dose of Generation-X awkwardness thrown in. Way To Normal is an embodiment of all these things, and proves once again that Folds is one of the most innovative and exciting performers in popular music. Way To Normal is a Wildy's World Certified Desert Island Disc. Make sure you give this one a spin.
Rating: 5 Stars (Out of 5)

You can learn more about Ben Folds at http://www.benfolds.com/. You can purchase a copy of Way To Normal at Amazon.com or wherever music is sold. Way To Normal is also available as a limited edition CD/DVD combo, and an even more limited CD/DVD/Vinyl combo that retails for $100. (What's Sony thinking?)
Posted by Wildy at 5:00 AM