Review: Farkus - Thought You Should Know 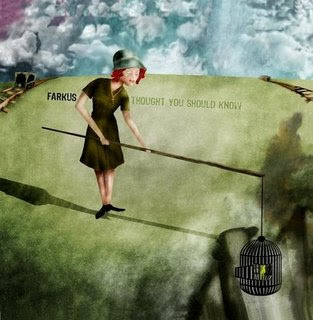 Farkus – Thought You Should Know
2008, Farkus

Chicago’s Farkus is a no-nonsense Rock N Roll band based in big rock hooks; smart, insightful lyrics and memorable melodies. Vocalist Tony Maguire shows shades of Glen Phillips (Toad The Wet Sprocket) and Gordon Downie (The Tragically Hip). I could tell you that he sounds almost exactly like Dave MacKinnon (Dig Circus, Hummer, The Fembots), but most of you will have no idea of who I’m talking about. Round it all out with a backing band that is powerful, supple and disciplined and you have the potential beginning of a great success story. Farkus’ latest release, Thought You Should Know, draws on the melodic traditions of The Beatles, great pop hooks and an indie/post-punk spirit that is at the heart of modern Rock N Roll.

Chance is the opening gambit on Thought You Should Know, knocking back the listener with big guitars and challenging lyrics. Farkus bears a very strong musical resemblance to The Tragically Hip here, with a big sing along chorus and hooks that will keep you flipping. Farkus makes you think while you dance, an exorcising of mind and body that is genuinely fun to behold. Bitter Cinderella is a stark and hair-raising call to attention of an acquaintance/friend that might hold true for the population at large. While repetitive, the song is powerful and definitely worthy of attention. Supposed To Be comes off sounding like a muscular version of Toad The Wet Sprocket, bolstered by big guitar sounds and a rampant hook that just will not leave the listener alone.

Salt settles firmly into modern guitar rock with a driving beat and superb vocals. Farkus will keep the mosh pit hopping with this tune, but the pop sensibility and big chorus will attract a wider range of fans than your typical punk tune. It's here that we see the true commercial potential of Farkus, and frankly, it's huge. Salt is the sort of song that could land a modern rock band firmly on the map. At the very least the licensing arrangements should keep Farkus comfortable for a while. New Love And Prescriptions is a slightly psychotic sounding slow song that is very interesting but not terribly commercial. This is one of those songs that could become a concert favorite for hard core fans, particularly with Maguires's vocals soaring the way they do. Thought You Should Know ends with Windsor Noose, a compelling song that explores the divide many of us cross at one point or another into adulthood and responsibility. It is the chasm that every performer negotiates either by giving up their dreams or by coming to terms with the tradeoff of chasing dreams and prosperity (for many). It's not a commercial tune, but a fine one.
Farkus shows two very distinct sides on Thought You Should Know. One is the compelling, thoughtful singer-songwriter; the other is the big, arena rock star band with impressive hooks, strong melodies and a sense of pop timing. Both hearts beat within this band, and as they are they will do very well for themselves. Bands like this if they stay together long enough; generally create at least one album that pulls all of this together in a special way. Farkus has the opportunity to be that type of band - one that creates a monumental pop experience that fans talk about for generations. Perhaps I'm dooming by saying it aloud, but somehow I doubt it. My advice to Farkus on that front is to ignore everything I'm saying and then just go out and do it. Don't believe the hype. Be it. Farkus is capable.

You can learn more about Farkus at http://www.farkusmusic.com/ or www.myspace.com/farkusmusic. You can purchase a download of Thought You Should Know on iTunes. No word on CD availability yet, so keep checking back at the band's website for additional information!
Posted by Wildy at 5:00 AM