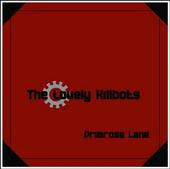 Elegance comes in many forms. Lauralee, the yin of The Lovely Killbots, brings a quiet elegance wrapped up in melancholy and disturbance. Her voice is rich and warm with a semi-eternal melancholy shadow while her piano creates cognitive dissonance for her thoughts. Yang Ryan provides drums and vocals, both corralling and propelling their collective muse. The mythology of the due implies they perhaps came together over spilt beer at a party, but what was set loose on that day (however it occurred) is a musical dynamo that's part surreal, White Stripes style rock and part non-conformist musical experiment. The Lovely Killbots offer up their debut album, Primrose Lane, for your consideration.

Crushed Orange Warrior opens with Lauralee singing along with her piano. The percussion here is just too much, threatening to drown out the piano and vocalist throughout much of the song. The song itself is quite pleasant and worthy of checking out. Re-creatio(n) is a bouncy, spring-like composition. Lauralee and Ryan's vocals here create a formidable palette with which to paint the song. Ghetto A is built on a straight up rock beat and arpeggio variations of the left hand. It's alt-rock themed with what sounds like a Rent reference thrown in. Ghetto B is a slowed down, more jazz-oriented composition based on the same melody

Fill The Space is perhaps the most commercial sounding track here. The recording is much tighter here than previously on Primrose Lane. Other songs of note are Don't Look Down, Dis/Gruntled and Whisper Softly.

The Lovely Killbots are a quirky Toronto duo playing slightly disjointed piano/drum art pieces that blend into and out of alt-rock seemingly on a whim. While making interesting and unusual songs, The Lovely Killbots prove that virtuosity isn't a requirement for success. Lauralee has a warm and lovely voice that is pleasant to listen to, but would not appear (from this album at least) to have piano skills that exceed mechanically proficient. Percussionist Ryan isn't asked to stretch the bounds extensively here, and so we're left with a narrow view of The Lovely Killbots. Primrose Lane is an interesting listen with merit, but it’s hard to imagine The Lovely Killbots having much long term success without expanding their repertoire.

You can learn more about the Lovely Killbots at www.myspace.com/lovelykillbots. You can purchase a copy of Primrose Lane at Indiepool.com.
Posted by Wildy at 5:10 AM