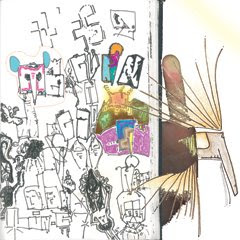 Alan Cohen is a concept guy. The Boston-based singer/songwriter/bandleader turns out new music like breathing. Cohen and his Orchestra of Personality comprise The Alan Cohen Experience, name coined by a drummer Cohen once knew. The name is apt, Cohen is a musical experience. His latest album, a 6-track EP entitled, aptly, Alan Cohen Experience, was released in November of 2008. Produced by Roger Greenwalt (The Pierces, Ben Kweller, Nils Lofgren), Cohen comes out of the deeply conceptual into the wonderfully strange.

Alan Cohen Experience opens with Elephant, a bizarre ditty that sounds like something Saturday Night Live's Dieter might have played on his fictional television show Sprockets; "All's quiet on the waterfront, it's just me and my ellee-phant." The music is minimalist Euro new wave circa 1985, with riffing guitar and a hip 1985 dance beat. Up Next is Roy's Rock, a classic rock mover with funk in its ancestry. Lyrically the song is fluff, but it's a fun listen that will be sure to get your feet moving. Communist Park reminds me of what might have happened if the early incarnation of They Might Be Giants wrote lyrics for and sang with Ben Folds. The tune is catchy; the arrangement based on pop piano and horns, the lyrical content is strange.

Saturday Morning is a dreamy musical landscape that's more a descriptive musical image than a story or idea. It's sweet in its own way with a lovely melody and perfect harmonies. Bonita is a "love song for no one"; it's a bit cliché and silly but quite enjoyable. The song is accompanied by gorgeous orchestration and shows the depth of songwriting talent chief songwriter Cohen possesses. Space Watch takes some lyrical license in a song that is both odd and richly rewarding.

The more I listen to Alan Cohen Experience the more they remind me of another band known for richly psychedelic songs. Canada's Rheostatics made a long career out of the same sort of material for nearly twenty years, although they had a slightly harder edge at times. Fans of The Rheostatics of Kevin Hearn (Barenaked Ladies) will get the Alan Cohen Experience. Musically the band/orchestra is top notch. The songwriting is clean, crisp and rich in orchestration and musical development. Lyrically they'll leave some folks behind, but not too many. Alan Cohen Experience is a worthwhile listen; one of those you might not listen to regularly over the long haul, but will call to you from time to time to pull it out and give it another spin.