Review: Christina Havrilla - In My Chair 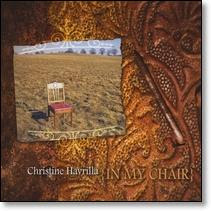 Christine Havrilla is one of the pre-eminent practitioners of enigmatic folk-rock music. Self-taught as a guitar player, Havrilla isn’t bound by the usual conventions. This freedom results in a musical will to power that runs all through the seams of Havrilla’s latest album, In My Chair. Walking the line between folk and rock in a form of urban cowgirl diplomacy, Havrilla sets things straight with songs based in frank and open lyrics and tuneful melodies.

In My Chair opens with the gritty, bluesy Fresh Sanity; Havrilla projects the sort of saddleback toughness that Bonnie Raitt has always embodied. Even on more vulnerable songs such as Exit 25, Havrilla has that air of cowgirl resolve. Her voice is extremely pleasant to listen to, with just enough edge to make it interesting; Powerful and tuneful, there is a rough beauty when she sings. Havrilla also has a tendency for distinctive and disarming candor that's in the style of Ani DiFranco with without the anger. Everyday is a wistful look back at better times in a relationship that is both touching and poignant and likely to be a fan favorite. Take Me To The River is a classic offering that should light up the stage and the listening crowd whenever Havrilla plays it. Expect this to be a concert staple.

Christine Havrilla bears a striking vocal resemblance to Melissa Etheridge on Light Up, so much so that Etheridge fans who hear this will do double-takes. The song plays on the edge of Rock N Roll in a couple of passages with the introduction of electric guitar and distortion. Havrilla really hits on all cylinders in Take Another Look. Everything works on this song, which is the sort that other artists hear and want to cover. Havrilla deserves a hit out of Take Another Look. Old House is likewise a fine composition. Havrilla brings it down to a highly personable level with a stripped down arrangement and highly emotive vocals. Great songs abound on In My Chair; other highlights include Sky, Want To Go, Sober Up Betty and Lay It On Me. Havrilla includes a live version of the song Daffodil as a welcome and much appreciated bonus track.

Christine Havrilla brings the toughness of a real urban country girl, the heart of a crooner and the no-nonsense approach that makes folk music so real and powerful. In My Chair vacillates between good and absolutely breathtaking. Havrilla is one of the standard bearers of American Folk music to a new generation. The tradition is in good hands.
Rating: 4.5 Stars (Out of 5)

You can learn more about Christina Havrilla at http://www.christinehavrilla.com/. You can purchase a copy of In My Chair at www.cdbaby.com/cd/havrilla5.
Posted by Wildy at 5:00 AM