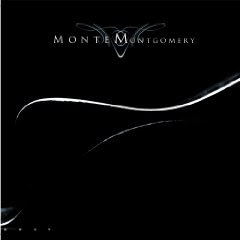 Monte Montgomery is a throwback to a time not so long ago when technical proficiency on guitar was only half of the equation. Guys like Jimi Hendrix, Eric Clapton, Yngwie J. Malmsteen, Mark Knopfler and even Eddie Van Halen were technically proficient but also played with a fire in their soul that was otherworldly. As rock has moved away from solo-driven guitar works, the heart required for virtuosic play has largely been left behind in favor of a number of technically proficient but musically cold guitar players. Monte Montgomery flies in the face of that trend, playing with a technical proficiency that is stupefying but also a creative genius and intensity nonpareil. As luck or fate or whatever prime mover you choose to credit would have it he's also a fine songwriter with a lyrical touch and a sense of theater that would make Dennis DeYoung proud. On his latest release, 2008's Monte Montgomery, Montgomery offers up what may be the last great guitar god album until his next release.

Montgomery opens with River, an acoustic blues rocker with significant slide work. On top of everything else, Montgomery has a wonderfully soulful voice that can rise to a scream or drop to a whisper without notice. Listening to Montgomery's fretwork is mind-numbing. You'd swear at times there are at least two, maybe three guitars playing, but it's all Montgomery. Let's Go has the sort of intricate guitar progression that makes your head spin. Guitarists will have a ball trying to pick these recordings apart and recreate them, and a good number will come up against their own musical mortality trying. Montgomery is truly in a class by himself.

Company You Keep is an instant classic. I was blown away by the virtuosity and lyrical impact of this song, all delivered with that vibrant blue-eyed soul voice. Montgomery even shows his mellow side on the sweet ballad Loves Last Holiday. Montgomery plays around with amazing runs and harmonics on You Can't Fool Everyone. The song has a distinctive pop feel in conjunction with some of the most amazing guitar work thus far on the album. Could Have Loved You Forever is destined to be a classic song for somebody. If it doesn't become a hit for Montgomery then someone will pick it up and re-record it a few years down the road to great effect. Other highlights include Be Still, How Far, Midlife Matinee and the amazing ten-minute take on Jimi Hendrix' Little Wing.

To listen to Monte Montgomery play you might assume he's playing an electric guitar throughout Monte Montgomery. In fact all of his guitar work is acoustic; frenzied fretwork, neck bends and all. Monte Montgomery is a lightning bolt to the music industry. This sort of album (or artist, for that matter) doesn't come along very often. A generation from now young pop music stars will be lining up to play with Montgomery on duet or tribute albums. For now, enjoy watching an icon in the making. Amazing album, amazing guitar playing, amazing talent. Monte Montgomery is a Wildy's World Certified Desert Island Disc.
Rating: 5 Stars (Out of 5)