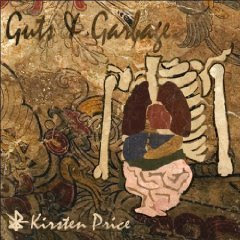 Female vocalists who can sing soul music are all the rage again. Names like Christina Aguilera, Amy Winehouse, Macy Gray and Joss Stone sell CDs, MP3s and concert tickets by the boatload, but all have surrendered something of themselves to the music industry and its producers. London born and New York City based Kirsten Price brings the same kind of presence and big voice to the table, but Price eschewed the major label path to maintain total creative control over her material. Her debut album, Guts & Garbage is the true test of whether it's worked. Early returns suggest Price did the right thing.

Price worked with producers Frederick Sargolini, Raphael Saadiq (Tony! Toni! Tone!) and Danny Saber (David Bowie, Madonna, Seal) in the process of creating Guts & Garbage, but all on her terms and in her own way. The end result is one of the most daring and hottest records to be released in 2008. Price mixes Soul, R&B and Rock with ambition and raw sexuality that will melt speaker wires, warp amplifiers and probably require a cold shower when you're done listening. Opening with Magic Tree, Price sets to tone quickly with a sultry vocal against minimal instrumentation just to show she's got the vocal goods. Pop and R&B music hasn't seen an opening so sultry in a generation, and Price is just getting warmed up.

All Right dances on a reggae beat and Price's meaty alto sound. Price will remind folks of Fiona Apple right off the bat, but Price can sing rings around Apple. She's got that low, husky alto that turns heads but she can also break out into an upper register with complete clarity and a glorious sound. Fall mixes spoken word French and sung English in a dark and mysterious love song that resonates in transformation through the major chord chorus. Crazy Beautiful is set to be a major pop and dance hit for Kirsten Price. It has the same infectious energy as Lou Bega's Mambo #5 but with real attitude. Don't be surprised if Crazy Beautiful is a major international hit. Ten years ago it would have been guaranteed. With today's fractious music business and one-note radio wasteland it might take a bit longer, but this song is huge.

Let Me Go opens with a gorgeous orchestral prologue that morphs into an electronic play land in which Kirsten Price can let her voice play. Price makes the most of it here in a piece that is vaguely reminiscent of Milla Jovovich's esoteric The Divine Comedy. Let Me Go mixes elements of R&B, rock and electronic ambience into a rough and beautiful soliloquy that is absolutely unforgettable. Possibilities allows Price one more opportunity to turn your speakers to mush with a vibrant and sensuous performance that will leave listeners more than a little unsettled. Other highlights include 5 Days Old, Freedom and Red Hot.

Kirsten Price isn't the next in a line of Soul/Pop vixens; she's the new face of Soul influenced rock music. Guts & Garbage is more than its name, offering one of the most moving most exciting musical performances I've heard in some time. Kirsten Price is the sort of iconic voice and character the music industry's been waiting for. It's easy to imagine her, twenty years from now as the new Queen of Soul Music. For right now, she's creating on the most vibrant and exciting mixes of Soul, R&B and Rock we've heard in many years. If you don't believe us, consider that some of her tracks have been featured on The L-Word, CSI and Cashmere Mafia even before the album came out! Guts & Garbage is a Wildy's World Certified Desert Island Disc; an instant classic.

You can learn more about Kirsten Price at http://www.kirstenprice.com/ or www.myspace.com/kirstenpricemusic. You can buy a copy of Guts & Garbage at StretchTheSkies.com or at Amazon.com.
Posted by Wildy at 5:10 AM